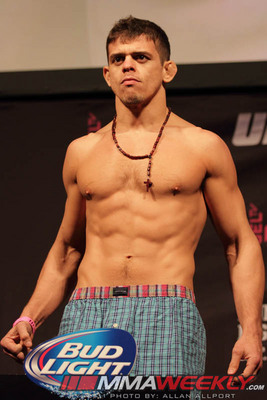 Caio Magalhães is ineligible for regional rankings due to inactivity.
Fighters must have at least one completed MMA bout in the past two years to be ranked.

Caio Magalhaes is a Brazillian middleweight fighter currently signed to the UFC. He is a black belt in brazilian jiu jitsu and trains out of Nova Uniao in Fortaleza, Ceara, Brazil. He has fought for promotions such as Shooto Brazil, Amazon Fight, and Iron Man Championship. He is a former Shooto Brazil and Iron Man Championship middleweight champion. Of his seven wins, four have been finishes including three submissions. He has never been finished.

Magalhaes began his career in 2009 with a submission win for Shooto Brazil. Over the next two years, he would pick up another four wins, two of which were first round stoppages.

In early 2012, Caio was signed by the UFC. He was set to make his debut against Fabio Maldonado at UFC 142, but an injury forced his opponent from the fight. He would instead make his debut five months later against Buddy Roberts at UFC on FX: Johnson vs. McCall. Magalhaes was overmatched standing and was unable to secure consistent takedowns due to fatigue which led to a unanimous decision loss. He was next set to face Michael Kuiper as a late replacement but shortly after agreeing to the bout, he pulled out due to injury. He would return exactly one year after his first UFC fight. He faced Karlos Vemola at UFC on Fuel TV: Nogueira vs. Werdum. Although he did poorly in the first round, he was able to secure a rear naked choke in the second round to secure his first UFC win. He next was slated to take on Nick Ring at UFC Fight Night 33. He would pick up a unanimous decision victory after controlling the wrestler on the ground for the majority of the second and third rounds.