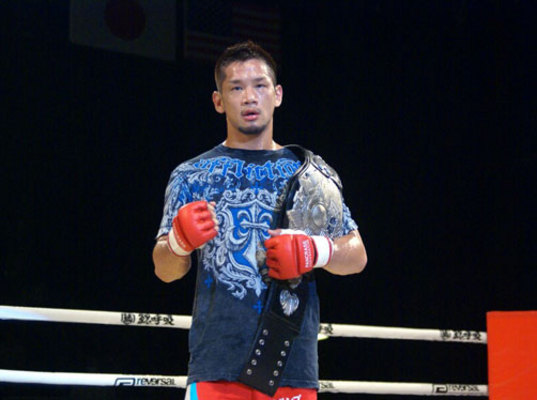 Fighting for a major organization has made Shintaro Ishiwatari ineligible for regional rankings.

Ishiwatari comes from a judo background which he trained in regularly during his school years at the Gakuen high school.

Ishiwatari began competing in amateur MMA tournaments in the year 2005. Ishiwatari participated on April 29 of that year in the Shooto Lightweight Freshman Amatuer East Tournament. Ishiwatari went on to win the tournament by winning a total of 5 fights that same day and finishing 2 of his 5 opponents in the first round by submission and KO.

Ishiwatari however decided to continue participating in amateur tournaments before turning pro, as he entered the 12th All Japan Amateur Shooto Championships in which he won his first 3 fights in the tournament by decision before losing a decision to Shooto and Bellator veteran Masakatsu Ueda.

Despite losing in the finals, Ishiwatari still decided to go pro and he made his debut on March 3, 2006 losing by TKO due to a cut in the second round to Daisuke Ishizawa.

Ishiwatari continued to fight in Shooto racking up a record of 6 wins, 1 loss and 3 draws. In that time span, Ishiwatari fought UFC veteran Michihiro Omigawa to a draw in Shooto.

Ishiwatari continued competing and having mixed success in SRC and Shooto.

On May 3, 2011 Ishiwatari made his Pancrase debut where he fought Tashiro Nishiuchi to a draw. In his second Pancrase fight, Ishiwatari found himself in a King of Pancrase Bantamweight Title eliminator against Motonobu Tezuka. Ishiwatari went on to defeat Tezuka by split decision and then went on to defeat Manabu Inoue to earn the title.

As King of Pancrase Bantamweight champion, Ishiwatari defeated Nishiuchi who he had fought in his Pancrase debut and successfully defended his title.

Ishiwatari has established himself as a Japanese 135 lb fighter to keep an eye on.