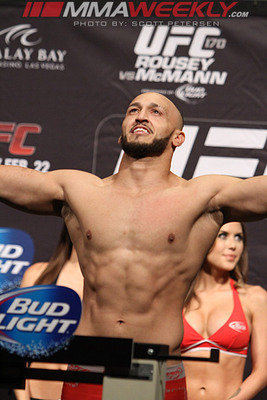 Yosdenis Cedeno is ineligible for regional rankings due to inactivity.
Fighters must have at least one completed MMA bout in the past two years to be ranked.

Yosdenis Cedeno is a Cuban lightweight fighter currently signed to the UFC. He is a black belt in Shyto Ryu Karate and trains out of Miami, Florida. He has previously fought for CFA where he was the lightweight champion. Of his nine professional wins, six have been finishes with all coming by T/KO.

Cedeno began his career in 2009 with a 42 second TKO. In his first year, he was able to compile a 3-1 record with his only loss coming by submission to future Bellator fighter, Derek Campos. He would start off 2010 with a decision loss to eventual TUF 12 winner, Jonathan Brookins, but he would bounce back later in the year with another first round TKO victory. He would take a year off of competition but would debut with CFA in late 2011 with a TKO at the end of the first round. Due to injuries to both his opponents and himself, Cedeno would be forced to take another year off of competition. Starting at the end of 2012, he was able to rattle off three wins in three different weight classes in seven months. This earned him a shot at the CFA lightweight title. He was able to win the title when he defeated Torrance Taylor by split decision.

In early 2012, Yosdenis was signed by the UFC. Hemade his debut against undefeated fellow promotional debutant, Ernest Chavez, at UFC 170. Cedeno landed heavier strikes early, but as he began to wear down, Chavez was able to use his grappling advantage to defeat him by split decision victory.