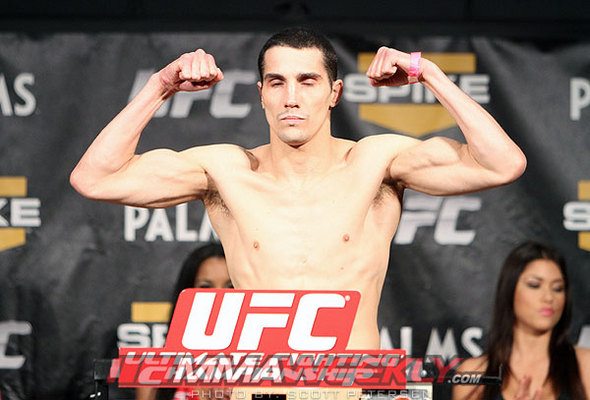 Roland Delorme is ineligible for regional rankings due to inactivity.
Fighters must have at least one completed MMA bout in the past two years to be ranked.

Roland Delorme is a Canadian bantamweight fighter currently signed to the UFC. He has a brown belt in Brazilian Jiu Jitsu, a black belt in Judo, and trains out of the Winnipeg Academy of Mixed Martial Arts in Winnipeg, Manitoba. He was a competitor on season fourteen of The Ultimate Fighter. He has notable wins over BJ Ferguson, Josh Ferguson, Nick Denis, and Edwin Figueroa. Of his nine professional wins, eight have been finishes including six submissions.

Delorme began his professional career in 2008 with a first round submission win. He would fight solely in Canada in his early career and was able to compile a 6-1 record in his first thirteen months. In 2011, he was selected to be apart of the fourteenth season of The Ultimate Fighter. He would defeat BJ Ferguson in the elimination fights to earn a spot in the house. In his first round fight, he would lose by submission to TJ Dillashaw after being outwrestled throughout the fight.

Roland made his official UFC debut at The Ultimate Fighter 14 Finale against Josh Ferguson who he was able to submit early in the third round. He would take on fellow Canadian, Nick Denis, at UFC on Fox 3 as a replacement for Johnny Bedford. In an exciting fight that saw both fighters rocked early, Delorme was able to battle back and secure a rear naked choke with just one second left in the first round. He next took on Francisco Rivera at UFC 149, but would lose by TKO. Later, the fight was overturned to a No Contest after Rivera failed to pass his drug test. He would next take on Edwin Figueroa nearly a year later at UFC 161 in his home city of Winnipeg, Manitoba. He would win by unanimous decision. At UFC 165, Roland would lose a spit decision to Alex Caceres. He is next set to take on David Grant at UFC Fight Night 37.