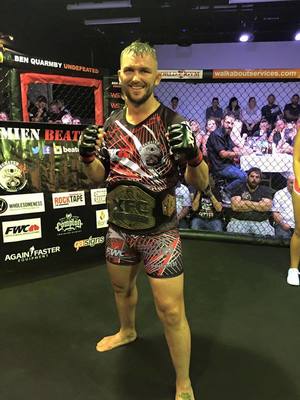 Damien Brown is ineligible for regional rankings due to inactivity.
Fighters must have at least one completed MMA bout in the past two years to be ranked.

Brisbane area native Damien Brown initially began studying martial arts at a young age for self defense, and renewed his commitment to martial arts as an adult as part of overall fitness and conditioning training. Since 2006, Brown has been in the Australian Army as a physical fitness instructor, incorporating Muay Thai as part of his training regimen. However, it was his discovery of Brazilian Jiujitsu in 2008 that led him to train and ultimately compete in MMA. Brown is now a member of one of Australia’s leading MMA teams – Integrated MMA – where he trains alongside elite fighters such as Adrian Pang, Matt Cain, Michael Mortimer, and Tony Rossini. Having already successfully competed in some of Australia’s top promotions, he now seeks to take on some of the Asia-Pacific’s best opposition here at Legend.