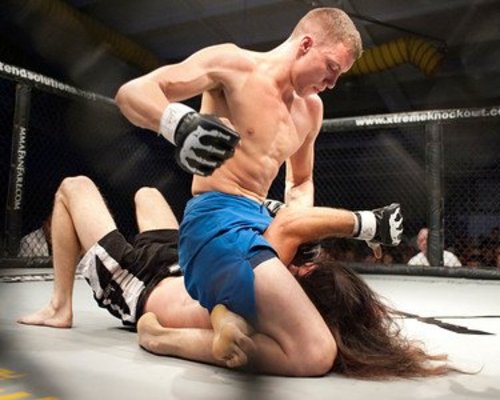 Fighting for a major organization has made James Vick ineligible for regional rankings.

James William Vick is an American mixed martial artist currently competing in the lightweight division. Vick was a cast member of The Ultimate Fighter: Live. Vick began his professional career fighting in regional shows in his home state of Texas. His first four fights all came in 2011, where he went undefeated with four straight wins.

Vick was one of 32 lightweight fighters announced by the UFC to participate in first live season of The Ultimate Fighter reality show. Vick won his way into the house when he defeated Dakota Cochrane by split decision after one round. He was then chosen to be part of Team Cruz as Cruz's fifth pick and ninth overall. For the first official fight of the show, he was chosen to fight Team Faber's third pick Daron Cruickshank. After a rough first part of the round, Vick landed a knee on Cruickshank as he shot in for a takedown, and won the fight by knockout in the first round. His quarter-final fight came against Team Faber's Joe Proctor. Vick was able to dominate the fight, outstriking Proctor on the feet and successfully defending all of Proctor's take down attempts. Vick won the fight by unanimous decision, earning his way into the semi-final round. Vick was selected to fight Team Faber fighter and eventual show winner, Michael Chiesa, in the semi-final round. Vick lost the fight via KO in the second round.

Vick was scheduled to face castmate Vinc Pichel on June 1, 2012 at The Ultimate Fighter: Live Finale. However, due to his KO loss in the semifinals, Vick was unable to compete at the event and Pichel was pulled from the card as well. He would pick up his first win in the UFC at Fight Night 26 when he was able to submit Ramsey Nijem in the very first round.