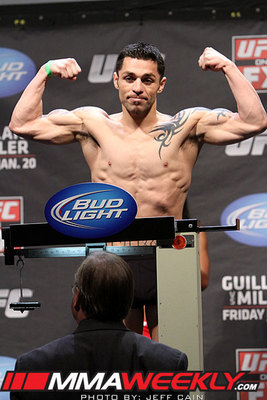 Fighting for a major organization has made Daniel Pineda ineligible for regional rankings.

Daniel Pineda is an American featherweight fighter currently signed to the UFC. He has a background in wrestling, is a brown belt in Brazilian Jiu Jitsu and trains out of 4oz Fight Club in Houston, Texas. He has previously fought in Art of War, EliteXC, Bellator, and Legacy Fighting Championships where he was the featherweight champion. He has notable wins over Johnny Bedford, Frank Gomez, Pat Schilling, Mackens Semerzier, and Justin Lawrence. Of his eighteen wins, all have been finishes including twelve submissions. He has won the UFC "Submission of the Night" award one time.

Pineda began his career in 2007 with a first round submission win. He would win his first three fights before losing for the first time when he appeared in the first fight of EliteXC's third show. After compiling an 8-2 record in his first two years, including a first round submission of Johnny Bedford, he would be picked up by Bellator. Unfortunately, he would lose his promotional debut at Bellator 6 and be released. This loss was the start of a four fight skid, the worst of his career. He would bounce back with two more wins and was given another shot with Bellator, but would again lose and be cut loose. Daniel would next be picked up by Legacy FC where he would go 5-0 over a year and a half while picking up the featherweight title.

In early 2012, Daniel would be picked up by the UFC where he made his debut against fellow newcomer, Pat Schilling, at UFC on FX 1 and was able to pick up a first round submission. He would get back into the octagon only thirty two days later as a late replacement against Mackens Semerzier who he would also defeat by first round submission marking two UFC wins in less than a total of four minutes. Pineda would have his seven fight winning streak snapped when he lost a unanimous decision to Mike Brown at UFC 146. He would have his fourth UFC fight in six months at UFC 149, but he would again lose, this time to Antonio Carvalho by first round TKO. He would take nine months off of competition but would return with a fury at The Ultimate Fighter 17 Finale when he beat Justin Lawrence by first round submission from a kimura which earned Daniel the "Submission of the Night" bonus. At UFC Fight Night 26, he would take on Diego Brandao but would again lose a unanimous decision, sending his UFC record to 3-3. He next took on Rob Whiteford in the opening bout of UFC 171, but would lose by unanimous decision, making his last five fight record 1-4.