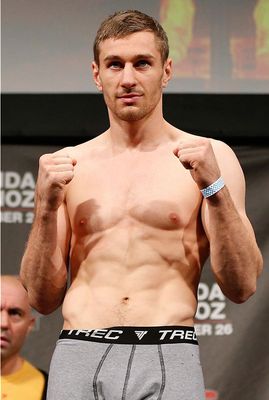 Piotr Hallmann is ineligible for regional rankings due to inactivity.
Fighters must have at least one completed MMA bout in the past two years to be ranked.

Piotr Hallmann is a lightweight fighter currently signed to the UFC. He is currently a Lieutenant in Polish Navy. He is a veteran of Shooto Europe, Cage Warriors and the UFC. He has held the lightweight title in the Cage Warriors promotion as well as winning an eight man one night tournament in Germany. He is undefeated since dropping to lightweight. Of his fourteen wins, thirteen have been finishes including seven T/KOs. He has earned the UFC "Submission of the Night" bonus one time.

Hallmann began his career at welterweight and was able to rattle off four T/KOs all in under a minute in just six months. After this impressive start, he would suffer his sole loss which convinced him to move to the lightweight division. Since then, he was unstoppable and went on a three year, ten fight winning streak. He was signed to the UFC in 2013 and made his debut against Francisco "Massaranduba" Trinaldo. Although he was an underdog going into the fight, Piotr was able to secure a kimura in the second round which earned him "Submission of the Night" honors. He fought TUF: Live finalist, "Ragin'" Al Iaquinta, at UFC Fight Night 30: Machida vs. Munoz  in Manchester, England but was unsuccessful, losing by unanimous decision and ending his ten fight win streak.

Hallmann is next scheduled to face Yves Edwards at UFC Fight Night 43: Henderson vs. Khabilov on June 7th, 2014.