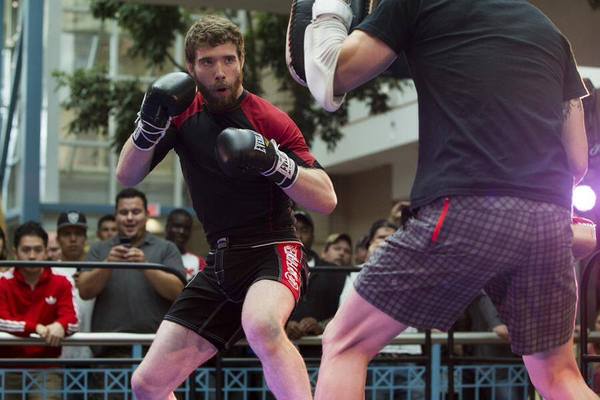 Mitch Clarke is ineligible for regional rankings due to inactivity.
Fighters must have at least one completed MMA bout in the past two years to be ranked.

Clarke was born and raised in Saskatoon, Saskatchewan. Making him the first ever UFC fighter to be born in Saskatchewan. Clarke began wrestling in high school at Walter Murray Collegiate Institute.

He currently resides in Edmonton Alberta, and trains at Hayabusa in St Albert. He also trains in Arizona at the MMA Lab with John Crouch and Benson Henderson.

Clarke made his professional MMA debut in May 2007 at XCW: Extreme Cage Warz, where be beat Jase Nibourg, via submission.

Clarke made his UFC debut at UFC 140 against fellow UFC newcomer John Cholish. Clarke lost the fight via TKO (punches) at 4:36 in the 2nd round; this was also his first lost.

Clarke faced Al Laquinta at UFC 173, Clarke being the underdog, checking in at +300, while Laquinta was -360, according to Las Vegas odds. This seemed obvious in the first round when Laquinta rocked Clarke with a right hook and dropped him. Clarke only being saved by the bell. However in Round 2 Clarke came out strong and was able to get Laquinta on the ground and up against the fence. There he sank in a D'arce choke, which Laquinta was slow to defend against. Clarke defeated Laquinta at 0:57 in the Round 2, earning his first Performance of Night Bonus.