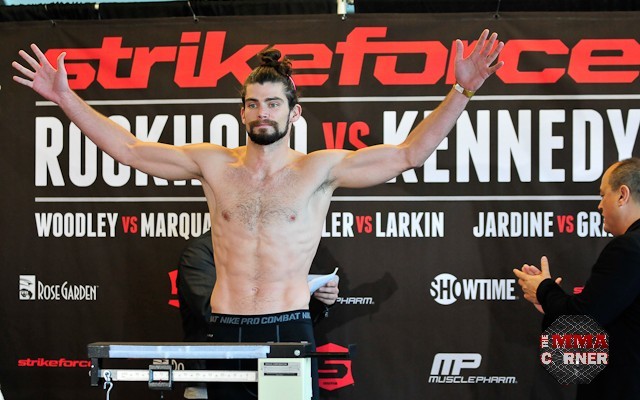 Tyler Stinson is ineligible for regional rankings due to inactivity.
Fighters must have at least one completed MMA bout in the past two years to be ranked.

Tyler 'The Evolution' Stinson possesses a pro MMA career that has gone over a six year span, and has fought for some of the best promotions out there, including Bellator and Strikeforce. He was unsuccessful in his professional debut, losing a split decision. After that, he would win his next 17 of 21 fights, and would make his Bellator debut against Dan Hornbuckle in the opening round of the welterweight tournament. He would lose the fight by first round triangle choke, but would rebound in his second Bellator outing, submitting Brazilian Leonardo Pecanha in the first round. He would fight twice more for Bellator, going 1-1, before signing to fight for Strikeforce.

Stinson made his debut for the California based company at 'Strikeforce: Fedor vs. Henderson,' and only needed 15 seconds to knock out Eduardo Pamplona. After this fight, he would take on welterweight contender Tarec Saffiedine. Early on, Stinson was giving the Team Quest product trouble, but Saffiedine would resort to his wrestling to sneak out a split decision. Recently, Stinson was outboxed in a fight against rising star Jordan Mein, where he lost by unanimous decision.

It was announced in December of 2013 that Stinson had been signed by the World Series of Fighting.