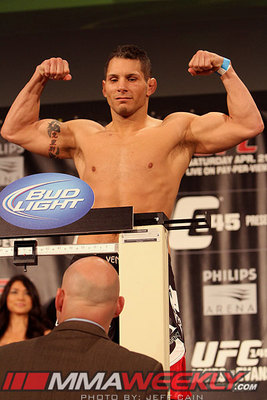 Chris Clements is ineligible for regional rankings due to inactivity.
Fighters must have at least one completed MMA bout in the past two years to be ranked.

Canadian welterweight Chris Clements has a very obvious strength when you look at his record. 10 of his 11 victories have come by way of knockout, with the other coming by split decision against Keith Wisniewski in his UFC debut. Included in his ten knockout wins is a remarkable three second knockout against Lautaro Lucas. He received notoriety in the MMA world once video later surfaced online of the victory.

Clements defeated veteran Rich 'No Love' Clementi at Score Fighting Series 3, and would go on to get his first fight inside the UFC, defeating Keith Wisniewski. He later fought in an entertaining, back and forth tilt with the always entertaining Matt Riddle, but would lose as he was submitted with a third round arm triangle choke.

'The Menace' does not possess a world class ground game, but will deliver something that all fans can appreciate: the ability to score a knockout at any given time.