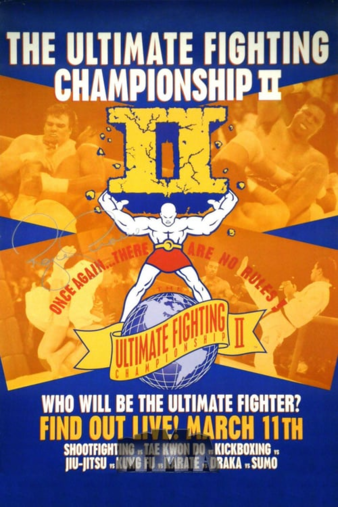 Following on the heels of the wild success of UFC 1, UFC 2 was a mixed martial arts tournament held on March 11, 1994 in which 16 competitors battled for a $60,000 prize. Doubling the amount of tournament entrants, UFC 2 recorded even more buys than the first event at 300,000. In addition to featuring Brazilian sensation Royce Gracie’s second straight UFC tournament win, the event marked the debut of the most famous referee in the sport in “Big” John McCarthy, who continues to work high-profile MMA events to this day. UFC 2 was the first and last UFC event to feature a 16-man tournament. UFC 2 was released on video before UFC 1 by several years.

Ken Shamrock wanted to fight in the tournament so he could face Gracie again but could not due to a broken hand.