UFC 4: Revenge of the Warriors 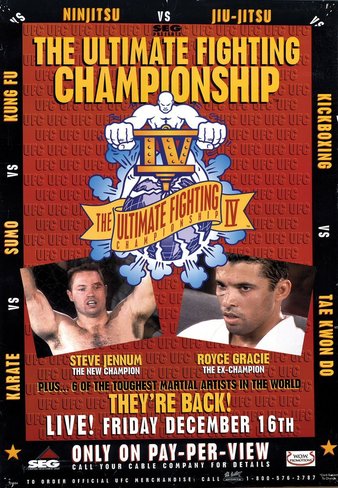 UFC 4, held on December 16, 1994, marked several firsts for the burgeoning fight promotion. Several alternate bouts were featured in order to avoid providing competitive advantages to the otherwise-fresh alternate fighters called upon to step into the tournament, a la UFC 3. The event also promised the UFC’s largest paycheck yet in the form of $64,000 to the tournament champion, and the Pay Per View broadcast marked the debut commentating duties of Bruce Beck and Jeff Blatnick.

In the tournament, Brazilian Jiu-Jitsu sensation Royce Gracie won his third UFC tournament by submitting all three of his opponents, including future UFC Champion and Hall of Famer Dan Severn 15:49 into the Finals. Although he returned to fight again at UFC 5, it was Gracie’s last Octagon appearance under the tournament format.

For the people who watched this event on PPV< the event ran over the three hour slot time and was cut off for the last few minutes.  It was due to this and UFC 33(three championship fights and two main card bouts all went the distance) that timing has been made with rigid guidelines so that the event does not go over the alloted time.