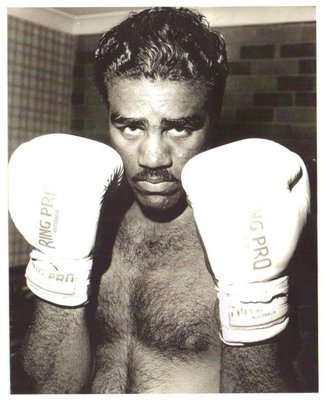 Art Jimmerson is ineligible for regional rankings due to inactivity.
Fighters must have at least one completed MMA bout in the past two years to be ranked.

Art Jimmerson bears two entirely different reputations in the worlds of professional boxing and mixed martial arts. To the boxing world Jimmerson was a respected journeyman fighter hailing out of St. Louis, compiling an 51-18 record over a nearly twenty year career spanning from 1985-2002. As an amateur, Jimmerson was the 1983 National Golden Gloves Middleweight champion. As a pro, he sports a win over top-tier light heavyweight Lenny LaPaglia.

To UFC fans, however, Jimmerson is at best a footnote to the ascendancy of Royce Gracie, and at worst a cruel punchline to the martial arts ignorance and unpreparedness of one-discpline fighters of the early 1990s. Jimmerson's one and only MMA fight came at UFC 1, where he faced Royce Gracie in Gracie's debut fight in the 16-man, "no rules" single-elimination tournament. Jimmerson entered the cage that night in Denver in 1993 sporting only one boxing glove, reasoning that he would use his gloved left hand to strike without damaging it for future boxing contests, and his ungloved right hand to grasp, pummel and utilize for the unforeseen. As it turned out, Jimmerson was immediately taken down and mounted by Gracie, and tapped out largely due to shock and fear of injury before Gracie had applied a choke. Jimmerson never managed to get off a single punch, and was thereafter known as "One Glove" Art Jimmerson to MMA fans.

Jimmerson remains involved in the worlds of boxing and, to an extent, mixed martial arts, where the UFC has embraced him as a part of its early history by inviting him on as a trainer at one of its west-coast training facilities. Jimmerson also remains the subject of occasional retrospective pieces into MMA's early days, including an excellent "where are they now" segment by Sherdog's Jordan Breen from March of 2009 (available at http://www.sherdog.com/news/articles/1/Art-Jimmerson-Where-Is-He-Now-16521). As Jimmerson summarized his lone sojourn into MMA to Breen, "I won't say I was young and dumb, it's that I'm always up for a challenge. I don't want to be perceived as a punk,” he says. “So, when they offered me the fight I was like, 'This is going to be a piece of cake. I know how hard I can hit, so what can a guy do to me?' But he was a whole different level."