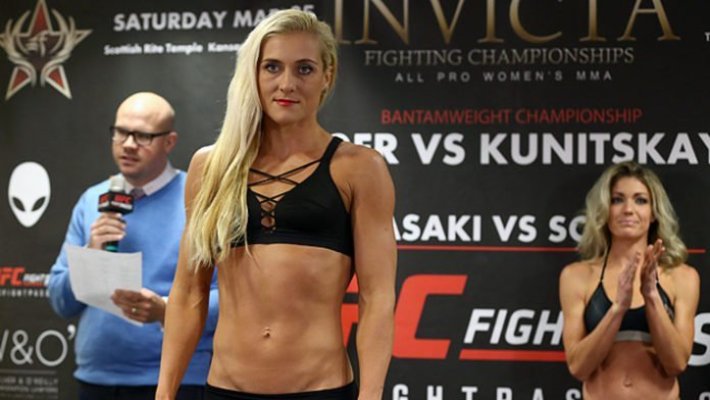 Fighting for a major organization has made Yana Kunitskaya ineligible for regional rankings.

Yana "Foxy" Kunitskaya (born November 11, 1989) is a Russian (Murmansk, Murmansk Oblast)  mixed martial artist in the bantamweight division in the Ultimate Fighting Championship (UFC). As December 16, 2019, she is #8 in the UFC women's bantamweight rankings.  Her mother, Olga Kunitskaya, was a professional gymnast and her father, Joseph, was a professional skier. She has a younger sister, Victoria. Yana became involved in martial arts early in her childhood, starting with taekwondo at preschool age, and won numerous tournaments among both girls and boys, with many fights ending in knockouts. At 12 years old, she began competing in hand-to-hand combat, participating in a large number of fights without suffering a defeat. When she was 16 years old, Kunitskaya went to live and study in St. Petersburg, and entered the SPGUFK team at Lesgaft National State University of Physical Education, Sport and Health, Department of Boxing. At age 18, she started practicing mixed martial arts (MMA). On August 9, 2012, Kunitskaya announced that she was pregnant with her first child. In August 2013, she announced the end of her sports career and her transition to coaching, but she came out of retirement three years later. She then signed a contract with the Invicta Fighting Championships (IFC or Invicta FC) in which only females compete. Kunitskaya made her Ultimate Fighting Championship (UFC) promotional debut at UFC 222 on March 3, 2018, against Cris Cyborg for the featherweight title. She lost the fight by TKO in the first round. She next faced Lina Länsberg on October 6, 2018, at UFC 229. She won the fight via unanimous decision. Kunitskaya then faced Marion Reneau on March 9, 2019, at UFC Fight Night 146. She won the fight by unanimous decision. Yana faced Aspen Ladd on December 7, 2019 at UFC on ESPN 7. She lost the fight via technical knockout in round three.