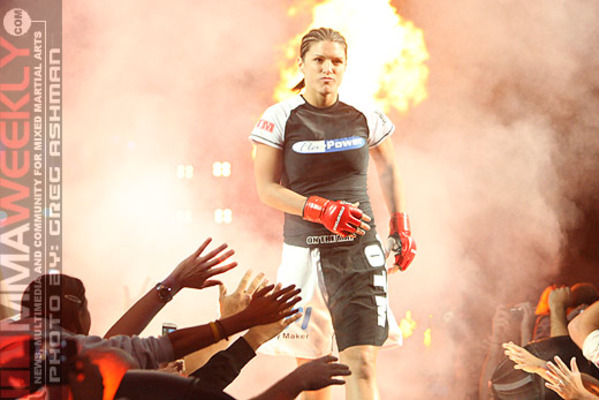 Gina Carano is ineligible for regional rankings due to inactivity.
Fighters must have at least one completed MMA bout in the past two years to be ranked.

Though no longer undefeated, Gina “Conviction” Carano remains the face of women’s MMA in the mainstream media and one of its very best fighters inside the cage. A certifiable star, in addition to her impressive fighting resume Carano has been a regular on the "American Gladiators" television series, was listed on Maxim Magazine’s Hot 100 List, and has appeared in major Hollywood motion pictures, including “Knockout,” which was helmed by Academy Award-winning Director Steven Soderbergh.

Carano made her professional mixed martial arts debut in 2006 and quickly ran her record to 7-0 while competing under the now-defunct EliteXC banner. Despite her high-profile defeat to dominant women’s champion Cristiane “Cyborg” Santos in her debut for the California-based Strikeforce promotion, Carano remains one of the most respected female fighters in the world, combining a lean, powerful physique with an expert Muay Thai striking game and solid grappling skills. Carano's bout with "Cyborg" remains a key milestone in the history of MMA, as it was the biggest bout in women's MMA history and the first women's bout to headline a major televised card.

Prior to entering the world of professional MMA, Carano was a successful Muay Thai fighter, having compiled a professional record of 12-1-1.