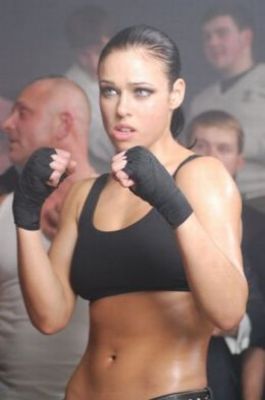 Fighting for a major organization has made Lena Ovchynnikova ineligible for regional rankings.

Lena aka “the hunter” a fighter from Ukraine with judo and Muay thai as a martial art background. She is 7 times world champion in kickboxing & Muay thai.

Lena Ovchynnikova came to prominence as an amateur kickboxer and Muay Thai fighter, medaling at various national, European and world championships. She became a world champion in the professional ranks for the first time in 2009 when she won the ISKA Women's World Super Bantamweight (56.4 kg/124 lb) Oriental Championship and the following year, she added two more world titles to her mantelpiece by winning the World Kickboxing Federation (WKF) Women's World Super Bantamweight (-56.4 kg/124 lb) belt under both kickboxing and Muay Thai rules.

She challenged Christine Theiss for her WKA world title in Dresden, Germany on November 20, 2010, losing by sixth round knockout. Ovchynnikova was then set to fight Jeri Sitzes in a match for the WBC Muaythai Women's International Bantamweight (-53.5 kg/118 lb) title in Haikou, China on December 18, 2010[3] but Sitzes withdrew for undisclosed reasons and was replaced by Li Xiao in a non-title fight. She defeated Li by unanimous decision.

Taking the place of Cong Wang who pulled out of the fight, Ovchynnikova faced professional debutant Tiffany van Soest in Las Vegas, Nevada, United States on October 22, 2011, and lost by technical knockout after retiring in her corner with a broken hand at the end of round two.Following this fight, Ovchynnikova forced herself to use only her left hand during rehabilitation which later made her ambidextrous. The pair were scheduled to rematch on July 21, 2012, in Croatia, but it never came to fruition.

Having amassed a perfect 8-0 record in mixed martial arts, Ovchynnikova signed with the Indian-based Super Fight League in 2012. She tasted defeat for the first time as a mixed martial artist in her promotional debut as she submitted to a rear-naked choke from Sanja Sučević in round two at SFL 1 in Mumbai on March 11, 2012. She then lost to Joanne Calderwood by unanimous decision at SFL 3 in New Delhi on May 6, 2012 in her next outing. Returning to Muay Thai, Ovchynnikova was expected to fight Emily Bearden for the IKF women's world bantamweight (-55.4 kg/122 lb) title at WCK Muay Thai: Nakamoto vs. Kitchen in Pala, California, US on August 18, 2012. Her opponent was later changed to Kealani Vanderleest in a non-title affair, however, and Ovchynnikova defeated her by unanimous decision. She was then set to compete in the Shoot Boxing World Tournament Girls S-Cup 2012 in Tokyo, Japan on August 25, 2012 and face Ham Seo-Hee in the quarter-finals[12][13] but was pulled from the card due to problems between shoot boxing and Ovchynnikova's team and was replaced by Lisa Ward. She represented the WCK Muay Thai promotion's team against a squad of Chinese fighters from Wu Lin Feng at WCK Muay Thai: Matter of Pride in Las Vegas on November 11, 2012. Initially, her opponent was Tang Jin[16] but was changed to Xifeng Tang. She lost by UD.

In her return to SFL, Ovchynnikova beat Fathia Mostafa via submission due to a guillotine choke at SFL 16 in Mumbai on April 26, 2013. Back in the Muay Thai ring, she defeated Emily Bearden by UD to be crowned the International Karate Kickboxing Council (IKKC) Women's World Super Bantamweight Muay Thai Champion at WCK Muay Thai: Hot Summer Fights in Temecula, California, US.