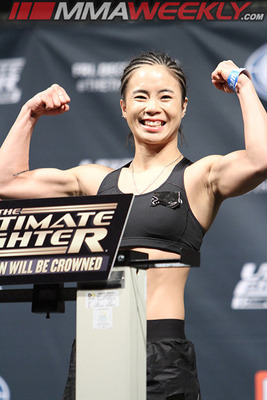 Fighting for a major organization has made Seo Hee Ham ineligible for regional rankings.

Seo Hee Ham or Seohee Ham is a female South Korean mixed martial artist and kickboxer. She is nicknamed Hamderlei Silva because of the similarities between her fighting style and Wanderlei Silva's style.

Ham comes from a Kickboxing background which she has trained in since 2004. She has fought in Deep, Smackgirl, and Jewels. She holds notable victories over Hisae Watanabe, Saori Ishioka, Misaki Takimoto, Mika Nagano, and Mei Yamaguchi.

Ham started her career 2-1 with a win over veteran Hisae Watanabe and a loss to veteran Miku Matsumoto. She next fought for the Smackgirl Lightweight (115 pounds) Championship against a top fighter in Yuka Tsuji. The odds were stacked against Ham and though she lost she saw her stock rise with the bout. Ham next took on Karate champion Saori Ishioka in the opening round of the 2008 Smackgirl World ReMix Tournament. Ham came away with a decision victory. She lost in the next round to elite submission grappler Megumi Fujii in the semifinals.

Ham entered the 2010 Jewels Lightweight (115 pounds) Queen Tournament. She would defeat veterans Mai Ichii and Mika Nagano in the first two rounds before losing to Ayaka Hamasaki by decision in the finals. After the tournament Ham would beat top fighters in Ishioka and Mei Yamaguchi to earn another crack at Hamasaki and the Lightweight title. This time Ham lost by TKO (corner stoppage) due to injury.

Ham also holds a 6-1 record in Kickboxing and a 3-2 record in Shoot Boxing. In Kickboxing she holds 2 wins over Megumi Yabushita and won the CMA KPW Lightweight championship. Her only loss came to Kickboxing and Shoot Boxing champion Erika Kamimura by decision. In Shoot Boxing Ham made it to the 2011 Girls S-Cup Final only to lose to Kamimura. In the 2012 S-Cup she defeated Lisa Ellis and lost to multi time champion Rena Kubota in the semifinals.

In December of 2014, Ham made her UFC debut at the Ultimate Fighter season 20 finale against Joanne Calderwood. After a back and forth entertaining fight, Ham would go on to lose via unanimous decision.