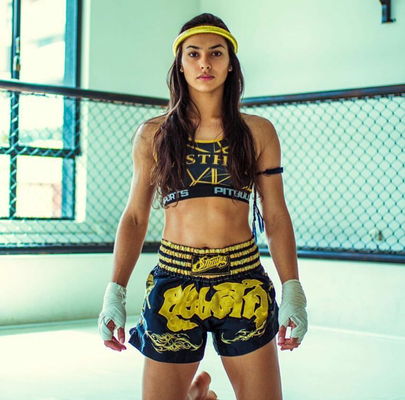 Fighting for a major organization has made Ariane Lipski ineligible for regional rankings.

Ariane Lipski (born January 26, 1994) is a Brazilian mixed martial artist. She is a former KSW Women's Flyweight Champion and currently competes in the flyweight division of the Ultimate Fighting Championship (UFC). Lipski was born in Curitiba, Brazil with a Polish heritage. Her grandfather migrated to Brazil before World War Two for security reasons. Lipski stated training Muay Thai at a young age and became the Brazilian Thai champion prior to her transition to M.M.A. Lipski fought most of her early MMA career primary in Brazil and Poland, notable under Konfrontacja_Sztuk_Walki promotion where she was three times the KSW Women's Flyweight Champion in Poland. Prior signed by UFC. Ariane was scheduled to make her UFC debut against Maryna Moroz, replacing injured Veronica Macedo, on November 17, 2018 at UFC Fight Night 140. In turn, Moroz pulled out due to injury on October 30 and as a result the bout was cancelled.  Her UFC debut came two months later on 19 January 2019 , against Joanne Calderwood at UFC Fight Night: Cejudo vs. Dillashaw. She lost the fight by unanimous decision. Her second fight came on 22 June 2019 at UFC Fight Night: Moicano vs. Korean Zombie. She lost the fight via unanimous decision. On 1 August 2019 it was announced that Lipski would fight Priscila Cachoeira at UFC on ESPN+ 22. However, due to Cachoeira tested positive for a diuretic and she was forced to pull out from the event. Thus her bout with Lipski was cancelled in the event and Lipski was in turned scheduled to fight at UFC Fight Night: Ortega vs. Korean Zombie against Veronica Macedo on December 21, 2019, but then moved to UFC Fight Night: Błachowicz vs. Jacaré on November 16, 2019. In turn, Macedo was not cleared to fight by CABMMA due to severe headaches one day before the event and she was replaced by newcomer Isabella de Padua. At the weigh-ins, de Padua weighed in at 130.5 pounds, 4.5 pounds over the flyweight non-title fight limit of 126. The bout proceeded at a catchweight. As a result of missing weight, de Padue was fined 30% of her purse, which went to her opponent Lipski. She won the fight via unanimous decision. As the first of her new, four-fight contract Lipski was scheduled to face Luana Carolina on May 16, 2020 at UFC Fight Night 175. However, on April 9, Dana White, the president of UFC announced that this event was postponed to June 13, 2020. Instead the pair was scheduled to meet on July 18, 2020 at UFC Fight Night 173.