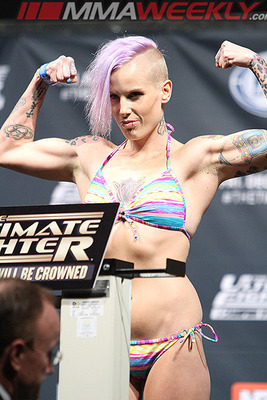 Bec Rawlings is ineligible for regional rankings due to inactivity.
Fighters must have at least one completed MMA bout in the past two years to be ranked.

Bec Rawlings is an Australian Straweight fighter who was born in Tazmania. She has currently signed with Bellator. She originally started training in order to get active and lose weight but when she met her future husband at a gym (he also fights), he encouraged her to begin competing in MMA. In her short professional career, she has only lost once, by knockout in her first fight. Since then, she has two submission wins, a knockout and a decision. Bec says that her favorite fight of her career was he first loss because the fight was her biggest challenge.

After gaining initial notoriety in the MMA world under the name Bec Hyatt, Rawlings divorced from her husband and reverted to using her maiden name of Rawlings in January 2014.

Rawlings was supposed to fight Joanne Calderwood at Invicta FC 4, but was moved to the main event to fight for the inaugural Invicta Straweight title. She was given the fight after several other fighters turned down the fight against Carla Esparza. Although she was able to demonstrate her striking skills, she ultimately lost the fight via five round decision. This fight was her first outside of Australia.

Following the conclusion of the Ultimate Fighter, Rawlings was slated to face her rival from the house, Heather Jo Clark at the season finale. Rawlings would go on to lose the back and forth fight via unanimous decision.

Rawlings In her next fight defeated lisa ellis via rear naked choke at 4:09 of round 1

And then defeated seo hee ham by unanimous decision.

Rawlings then went on a four fight losing streak which led to her release from the UFC.

Most recently rawlings joined the bare knuckle fc where she won her first fight against Alma Garcia.

Rawlings won the fight when Garcia refused to come out of her corner after the secound round.

In her second fight for bare knuckle fc Rawlings faced off against Britain Hart and won the fight by split decision.

She left BKF as the first BKF women champion. Rawlings is going to debut for Bellator at the Bellator 231 event against Ilara Joanne.