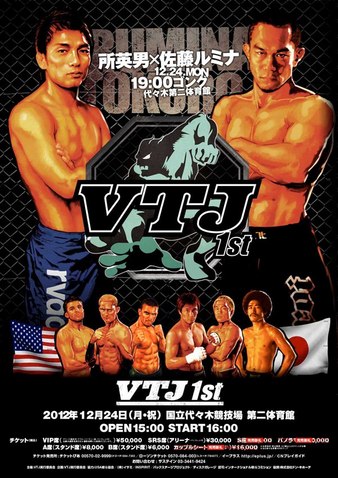 Tapology members can make predictions for upcoming MMA & Boxing fights. VTJ 1st is closed for new predictions. 194 total members made predictions on this event, breaking down as follows below.

Leaderboard of the best predictions by member: VTJ 1st Leaderboard

Vale Tudo Japan 2012 is the eight event in a series which dates back 18 years to 1994. The early events featured some of the pioneers of the sport we know and love today such as Rickson Gracie, Yuki Nakai, Enson Inoue, Rumina Sato, Frank Shamrock and Randy Couture amongst others. Possibly the best know event is VTJ 1995 which was heavily featured in the heralded Rickson Gracie documentary "Choke".

VTJ 2012 will be the first even in the series to be held in a cage under the unified rules. The event sees a mix of veteran home talent such as Rumina Sato (who amazingly fought on the 1996 card) who will face off another Japanese veteran in Hideo Tokoro.  Also on the card are former UFC contenders Carlo Prater and Ian Loveland.

Widely consider as the top female fighter in the world at one point, Megumi "Mega Megu" Fujii also faces off against Mei Yamaguchi - making history as the first female bout to be held within VTJ.