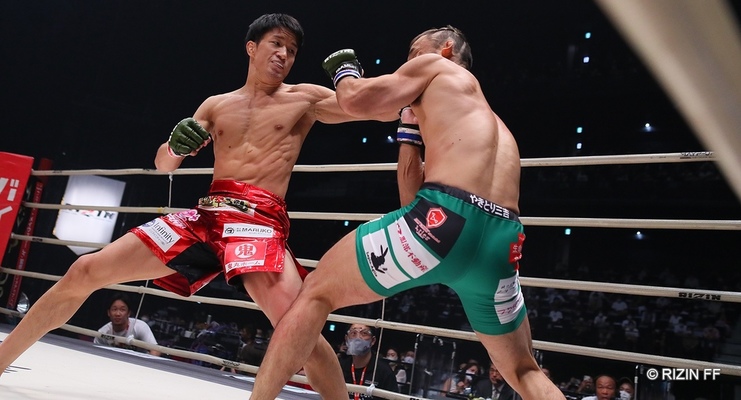 Fighting for a major organization has made Kai Asakura ineligible for regional rankings.

Kai Asakura (born 31 October 1993) is a Japanese mixed martial artist currently competing as a bantamweight in the Rizin Fighting Federation. He is the younger brother of Mikuru Asakura. A professional competitor since 2012, he formerly competed for Road Fighting Championship, Fighting Network Rings and DEEP. He is a former Fighting Network Rings 132 lbs champion. He holds notable wins over Ulka Sasaki, Kyoji Horiguchi and Manel Kape. The Fight Matrix has him ranked as the #15 bantamweight in the world, as of 21 April 2020.


Kai Asakura began his professional career under the banner or DEEP, when he faced a fellow debutante Tomoya Suzuki. Asakura won the bout via a first round TKO.

He would then fight with Fighting Network Rings new brand of MMA events named Outsider, after a three year hiatus. He faced Satoshi Date, whom he defeated in the second round by TKO. Two months later he faced Keigo Takayama winning the fight after just 40 seconds by way of TKO. Two months later he fought a debuting Jung Bin Choi, earning his first career submission, forcing Choi to tap to a D'Arce choke in the first round. Asakura's next opponent was Jong Hyun Kwak. Asakura again ended the fight in the first round, winning through a TKO.

Fighting with Road Fighting Championship, Asakura fought Liu Xiaoyang, who he beat by a RNC in the first round. Fighting for the Fighting Network Rings 60 kg title, Asakura faced Yoichi Oi. He won the title fight in the first round, defeating Oi at the very end of the first round by TKO. Asakura's next opponent was Heili Alateng, who was riding a six fight winning streak. Asakura won the fight after 29 seconds, hitting Heili with a short left hook, followed by a knee strike. Asakura suffered his first career loss to Je Hoon Moon during Road FC 39, losing by way of TKO.

Kai Asakura made his Rizin debut on 29th December 2017, during RIZIN Fighting World Grand Prix 2017. Asakura was scheduled to fight the ZST Flyweight Champion Seiichiro Ito. Ito suffered a nasal fracture before the bout, and was replaced by Kizaemon Saiga. Kai won the fight in the second round after knocking Saiga out with a grounded knee.

During Rizin 10, Asakura faced one of the world's foremost bantamweights, Manel Kape. After suffering an early flash knockdown, Asakura rallied and improved as the fight went on. He would win a closely contested split decision, which would be named as a Fight of the Month nominee for May of 2018 by MMA Junkie.

Asakura was next scheduled to fight Thanongsaklek Tiger Muay Thai at Rizin 11. The fight was subsequently rescheduled for Rizin 13, after Asakura injured his right knee. At Rizin 13 Asakura exploited the Thai native's lacking ground game, and won a unanimous decision.

During RIZIN Heisei's Last Yarennoka! Kai Asakura was given the opportunity to avenge his sole career loss to Je Hoon Moon. Asakura won the rematch by way of a unanimous decision.

His next fight was scheduled for Rizin 18 as a non-title bout against the Rizin bantamweight champion Kyoji Horiguchi. Asakura would feint Horiguchi backwards and land a big right hand as Horiguchi was blitzing in. Following up with knees and puches, Asakura was awarded a first round TKO win in a stunning upset over the champ.

Two months later he faced Ulka Sasaki during Rizin 19. Asakura would completely dominate Sasaki, stunning the veteran with a right hand, and following up with grounded knees and soccer kicks. This would earn him a TKO win, as Sasaki was unable to contiue due to a broken jaw.

This six fight winning streak gave Asakura a chance to fight for the Rizin bantamweight strap, in a rematch against Kyoji Horiguchi during Rizin 20. Horiguchi would pull out of the bout due to a knee injury and vacated the belt. Asakura would face Manel Kape in a rematch for the vacant Rizin bantamweight title. Kape knocked Kai down twice in the beginning of the second round which forced the referee to stop the fight, earning Kai his second professional loss.