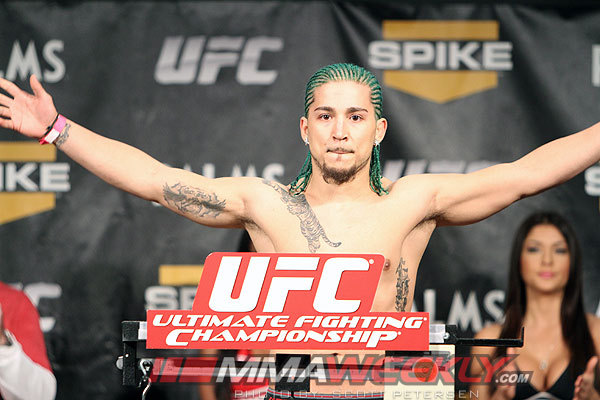 Louis Gaudinot is ineligible for regional rankings due to inactivity.
Fighters must have at least one completed MMA bout in the past two years to be ranked.

Louis Gaudinot is an American flyweight fighter currently signed to the UFC. He is a fourth degree black belt in Karate and trains out of Team Tiger Schulmann in Hoboken, New Jersey. He has a degree in Criminal Justice from Seton Hall. He has previously fought for Ring of Combat where he was the flyweight champion and has a notable win over John Lineker. He was also a competitor on The Ultimate Fighter season fourteen. Of his seven professional wins, five have been finishes with three submissions. He was awarded "Fight of the Season" during his time on TUF and has also won the UFC "Fight of the Night" award one time.

Gaudinot began training in Kyokushin Karate at the age of six with Tiger Schulmann. In 2008, he made his amateur debut with a third round armbar victory. Over ten months, he wold compile a 3-1 record with his only loss coming by decision. He signed with New Jersey's Ring of Combat to compete as a professional in April 2009. His debut came at ROC 24 against fellow debutant fighter, Chris Aquino. Gaudinot controlled the bout and won the fight via unanimous decision after two, four minute rounds. After the fight, he stirred some controversy when he flipped off Aquino's corner. He next fought at ROC 25 where he suffered his first professional loss, a unanimous decision loss to Nick Cottone. At ROC 26, Gaudinot bounced back with a second round TKO victory over Jeff Cressman. Two months later, he was again in action at ROC 27 where he competed in his first three round fight, winning via unanimous decision against Nate Williams. Gaudinot fought Tuan Pham at ROC 28 and was able to pick up a first round knockout. The impressive victory earned Gaudinot a chance at the vacant Ring of Combat Flyweight Championship. He fought for the title at ROC 31 against Jessie Riggleman. Gaudinot dominated the bout and won via submission nearing the end of the first round.

Known for his green hair and well rounded style, the New York native gained notoriety when he was selected as a cast member on the fourteenth season of The Ultimate Fighter. He was at a slight disadvantage during the show because he normally fought at flyweight, but since the division was not yet a part of the UFC, he fought in the bantamweight division during TUF. Gaudinot defeated Paul McVeigh by TKO with only one second left in the fight to earn a spot in the house. In his first round fight in the house, he would lose by second round submission to Dustin Pague and was eliminated from the tournament. After the season was over, he would be awarded the "Fight of the Season" bonus for his fight with Pague.

At The Ultimate Fighter 14 Finale, Louis would make his official UFC debut. He would once again fight a larger bantamweight, this time taking on Johnny Bedford, but would lose by third round TKO. After this fight, he would drop down to the UFC's newly added flyweight division. Gaudinot would fight John Lineker in his UFC flyweight debut, in what could prove to be one of the best fights of 2012. This was to be just the third flyweight fight ever in the UFC, but Lineker would miss weight, coming in at 127 pounds, so it was changed to a catchweight bout. The two fighters had various punching exchanges throughout the bout. However, Gaudinot would win the fight by choking the young Brazilian out with a guillotine choke. They would be awarded "Fight of the Night" for their performance. After being sidelined with an injury for more than a year, he would return to take on Tim Elliott at UFC 164, but would lose by unanimous decision, putting his UFC record at 1-2. He next faced Phil Harris at UFC Fight Night 37 and won via submission in the first round with a guillotine choke.

Episode 4 Dustin Pague def. Gaudinot by Submission (Rear Naked Choke) at 2:32 of Round 2