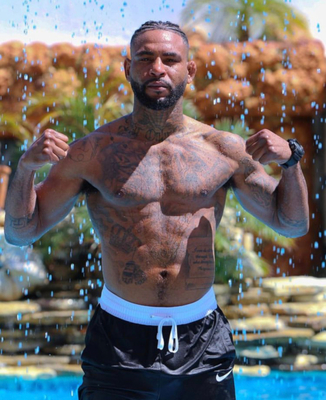 Fighting for a major organization has made Darrion Caldwell ineligible for regional rankings.

Caldwell is a former NCAA Division I Wrestling Champion, and 2 time All American, competing in Folkstyle Wrestling. Born and raised in Rahway, New Jersey, Caldwell competed in Wrestling, ootball, and baseball at Rahway High School. Caldwell was a two-time All-Region football player, but had his most success on the wrestling mats; he had a record of 146 - 4 in high school, and was a three-time state Champion.

Caldwell continued Wrestling at North Carolina State University, and during his true freshman season his record was 20 - 6. Caldwell missed becoming an All-American by one match, and had one of the best freshman seasons in the history of the school. In 2007 - 2008, Caldwell went 36 - 5 and finished in 5th place in the nation, earning All-American status. In 2008 - 2009, Caldwell went 38 - 1, and became national Champion by defeating 2008 national Champion and Dan Hodge Trophy winner, Brent Metcalf, 11 - 6. Caldwell was named the most outstanding Wrestler of the National Championship tournament, and his only defeat was by injury default.

After this performance, Caldwell was invited to attempt to join the senior-level Freestyle Wrestling world team, despite having little experience in this different style of Wrestling. Caldwell finished in 3rd place at the world team trials, and defeated the reigning Olympian at the weight class along the way. In the offseason Caldwell suffered a series of devastating shoulder injuries, which required surgery and forced him to redshirt the 2009 - 2010 season.

Caldwell returned to action midway through 2010 to 2011, and was undefeated in 15 matches. Caldwell was the number one seed for the 2011 National Championships, but unfortunately suffered yet another shoulder injury in the second round match, which ended his college career. Caldwell finished his collegiate career with a 109 - 13 record, with 58 victories coming by a pin. Caldwell attempted to qualify for the 2012 U.S. Olympic team, but the string of injuries left him outside of his top form. Caldwell was eliminated in round three of the final U.S. Olympic trials qualifier, and then decided to pursue a career in MMA.