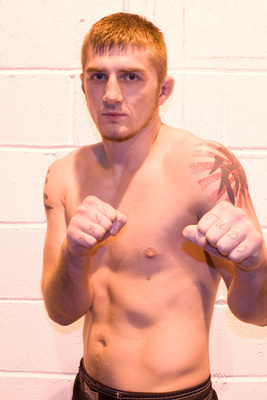 Danny Mitchell is ineligible for regional rankings due to inactivity.
Fighters must have at least one completed MMA bout in the past two years to be ranked.

Danny Mitchell is a British middleweight fighter who was previously signed to the UFC. He holds black belts in Brazilian Jiu Jitsu, Kickboxing, and Tae Kwon Do. He trains out of Asylum Vale Tudo in Leeds, England. He has previously fought for Cage Warriors, BAMMA, and Superior Challenge and has notable wins over Nico Musoke, Dean Amasinger, and Besam Yousef. Of his ninetenn professional wins, seventeen have been finishes. He is not only known for finishing fights by submission, but doing so with rare submissions such as the twister and a flying triangle choke. He holds the first twister finish in Bellator history.

Mitchell began training in martial arts at an early age after watching some of the early UFC events. He would compile an 8-2 amateur record before turning professional in 2008. In his first fourteen months as a professional, he would go undefeated through eight fights while picking up five submission wins. Over the next year, he would go through a rough patch, going 1-3-1 including a win over Nico Musoke, and the only submission loss of his career, to Gunnar Nelson. He would bounce back with a flying triangle submission over Dean Amasinger as well as two straight wins by TKO. He would lose a fight with Kendall Grove in 2013 after a nearly year long layoff, but would again bounce back with two more wins, including a submission of Besam Yousef who had just been released from the UFC.

In Early 2014, Mitchell was signed by the UFC. He made his promotional debut against Igor Araujo when the UFC returned to London for UFC Fight Night 37. He was able to stay competitive throughout the fight but would ultimately lose a unanimous decision.