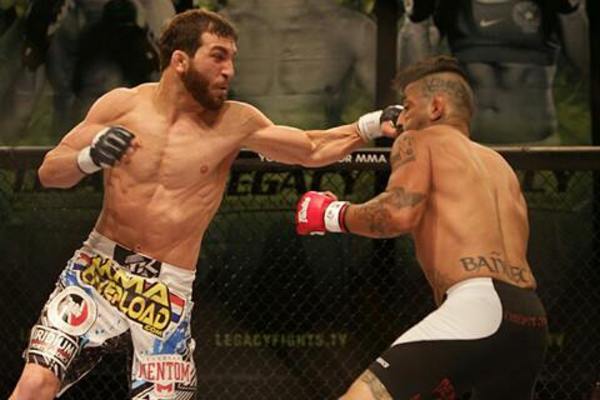 Alp Ozkilic is ineligible for regional rankings due to inactivity.
Fighters must have at least one completed MMA bout in the past two years to be ranked.

Alptekin Ozkilic is a Turkish flyweight fighter currently signed to the UFC. He is a purple belt in Brazilian Jiu Jitsu. He was a two time NJCAA All American wrestler as well as the Turkish national Greco Roman wrestling champion. He hold a degree in Business Administration from Missouri Baptist University. Alp was the wrestling coach for Team Cruz on The Ultimate Fighter 15. He has previously fought for Legacy FC and Ring of Combat and hold a notable thirty second knockout of UFC and WEC veteran, Antonio Banuelos. Of his eight professional wins, three have been stoppages including two T/KOs.

Ozkilic began to train in MMA after his college wrestling career was over in 2009. He was roommates with fellow UFC flyweight, Josh Sampo, who introduced him to the sport. He began his amateur career in 2010 and was able to compile a 5-0 record in just seven months. The same year, Alp would turn professional. In his first year as a pro, he would pick up four wins, three of which were by decision. He debuted with Lecagy FC in early 2012 in an eight man bantamweight tournament. He would win his first fight by decision, but two months later, he would lose his semifinal fight to Chico Camus who would eventually pull out of the tournament due to being called up by the UFC.

Alp would spend the middle of 2012 as the wrestling coach for Dominick Cruz's team on TUF: Live. After the show, he would pick up two two wins with Rumble Time promotions including a devastating finish of Josh Robinson via elbows from full mount. He would have one final fight with Legacy FC in May, 2013. He was originally supposed to take on a local fighter, but when his opponent pulled out, UFC veteran, Antonio Banuelos, stepped in. Alp was a slight favorite gong in to the fight and proved why when he knocked out Antonio with a vicious left hook then sent him spinning to the ground thirty seconds into the fight.

In late 2012, Ozkilic was preparing to for another fight with Legacy FC when he was called in by the UFC as a late replacement against Darren Uyenoyama at UFC on Fox 9.Although he was a late replacement, Alp was able to win a split decision over the veteran. He next took on undefeated UFC newcomer, Louis Smolka, at UFC Fight Night 35, but would come up on the short end of a unanimous decision, snapping a four fight win streak.

At UFC Fight Night 45: Cerrone vs. Miller, Ozkilic faced John Lineker. In a explosive and extremely entertaining fight, with both fighters doing damage to one another, Lineker kept the judges away from the fight when he landed a series combinations to knockout Ozkilic, with only 9 seconds left in the bout. The fight was in the Top 20 best fights of 2014 and was awarded Fight of the Night honours; giving Ozkilic a nice $50,000 bonus.

Ozkilic will hope to get back on a winning track when he faces UFC newcomer Ben Nguyen at UFC FN 65: Miocic vs Hunt.