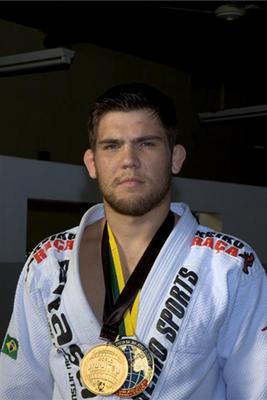 #58
Greatest MMA Grappler of All Time

Robert Drysdale is ineligible for regional rankings due to inactivity.
Fighters must have at least one completed MMA bout in the past two years to be ranked.

In 2010 Drysdale made the difficult jump from Jiu Jitsu tournaments to the world of Mixed Martial Arts.  Robert however has made the transition with relative ease having won all 6 of his bouts not only by submission but also all in the first round going no longer than 3 minutes in any bout.

Prior to his foray into professional fighting, Drysdale was responsible for training many of the world's top MMA fighters in preparation for competition. His students include Frank Mir, Forrest Griffin and other UFC fighters, and Drysdale acted as an assistant coach on Season 8 of The Ultimate Fighter on behalf of Team Frank Mir. He currently lives and trains out of Las Vegas, Nevada, where his Robert Drysdale Jiu-Jitsu Academy is host to a thriving contingent of avid BJJ students. In preparation for more MMA fights, he trains with prominent Las Vegas fighters including Wanderlei Silva and Randy "The Natural" Couture.

Drysdale signed with the UFC and was set to make his debut at UFC 163 against Ednaldo OIiveira. The fight didn't happen because Drysdale failed a random drug test for elevated testosterone-to-epitestosterone (T/E) ratio.

After being suspended, his UFC debut was a submission victory over Keith Berish at The Ultimate Fighter 19 Finale.

He then failed another drug test and had his win overturned by the Nevada State Athletic Commission.