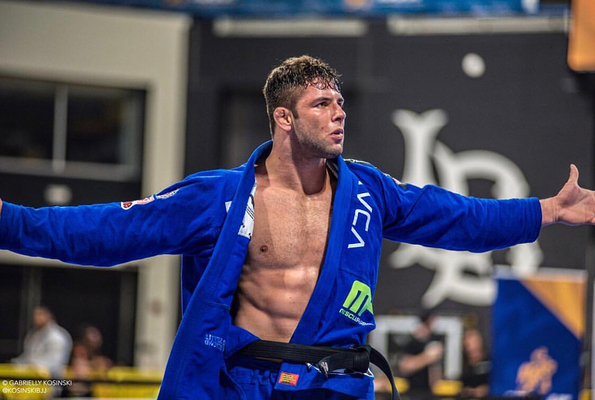 Marcus Almeida, also known as “Buchecha” (or Bochecha), is a Brazilian Jiu-Jitsu black belt under Rodrigo Cavaca and a member of the Checkmat academy, being widely regarded as the greatest grappler of his generation and arguably of all time in the sport of BJJ. His reputation is backed by his 6 IBJJF World Championship open weight titles, being the record holder of absolute gold medals at the ‘Mundial’ after breaking Roger Gracie‘s previous record (3) back in 2016.

Nickname: “Buchecha”, or rather “Bochecha”, means cheek/big cheeks. Marcus’ instructor, Rodrigo Cavaca, nicknamed him Buchecha because when he first started training he was a bit overweight and his cheeks were prominent.

Favorite Position/Technique: Double Leg, Toe Hold, Choke from the back.

Marcus Almeida (192cm / 6’3″ tall) was born on the 8th of January, 1990, in a town called Sao Vicente close to Santos in the state of Sao Paulo. As a child, Marcus wanted to be a football (soccer) player, but he was not very good at it by his own admission. He then turned his sights on Surfing a sport he practiced from a young age.

Brazilian Jiu-Jitsu only came into “Buchecha’s” life in his mid-teens. He was 14 years old when his sister first started training BJJ. Marcus’s father, Mr. Cleiton Almeida, was very protective of his daughter and started accompanying her to class. With time Mr. Cleiton started practicing himself, and from there it wasn’t long until he was dragging his son Marcus with him. Luckily young Marcus loved Jiu-Jitsu from the start and started training every chance he could.

Marcus’s physical abilities helped by the masterful eye of his instructor, BJJ World Champion Rodrigo Cavaca, soon turned Buchecha into one of the most feared athletes in the lower belt divisions, and after successive wins in the “Brasileiro”, Pan American, Sao Paulo Cup, Scandinavian Open and “Mundial”, Almeida received his black belt (while on the podium after his win at the World Championship in 2010), not long after his father was also awarded his black belt in BJJ. He moved to the United States with his master and his teammate Thiago “Baiano” Aragao in 2010 where he confirmed he belonged in the major league of Brazilian Jiu-Jitsu, winning the World Nogi Tournament later that year, closing the bracket with his “Avengers” teammate, Roberto “Cyborg” Abreu. After a short spell when he returned to his native Santos in 2011 with his master Cavaca, Buchecha came back to the United States where he started coaching and competing full time.

After this return to the United States (2012), Marcus Buchecha Almeida’s career as a black belt competitor took off to another level with a win in both his weight and the absolute category at the Pan American Championships as well as the World Jiu-Jitsu Championships (both with IBJJF). He also fought in the legendary Roger Gracie at the Metamoris Pro Invitational, giving a great display of jiu-jitsu, tying the match in submission only rules with the 10x world champion.