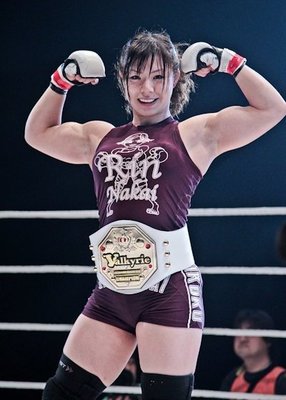 Nakai is a Bantamweight fighter with a Judo background. She began training Judo at the age of 3 and in middle school she was ranked #5 and in high school she was ranked #3 in all of Japan. She has fought in Pancrase, Smackgirl, Valkyrie and Sengoku. She holds notable victories over Tomomi Sunaba, Megumi Yabushita, and Kyoko Kimura.

Nakai went 7-0 before entering the Valkyrie Openweight Tournament. Nakai would defeat Mayumi Aoki by armbar and Mizuho Sato by TKO to win the tourney and became Valkyrie's first Openweight champion. She then went 2-0 with a draw against Danielle West. She next entered the 2012 Pancrase Bantamweight Queen of Pancrase Tournament. She defeated Mayumi Aoki again, this time by TKO in the semifinal. The final pitted Nakai against West again to finally determine a winner between them. Nakai won by decision to claim the Bantamweight Queen of Pancrase title.

Nakai will face Brenda Gonzales in a non-title fight at Pancrase 247.

In Submission Grappling Nakai is 2-2 with all of her matches coming during the 2006 Smackgirl Middleweight Grappling Queen Tournament. She won in the first round by armbar and the second round by points. She lost on points to Takayo Hashi in the semifinals and finished the tournament by losing on a referee decision in the 3rd place match.

Rin Nakai made her UFC Debut against Miesha Tate at UFC Fight Night 52: Hunt vs. Nelson on September 20th, 2014; in which, she lost to Tate via Unanimous Decision.