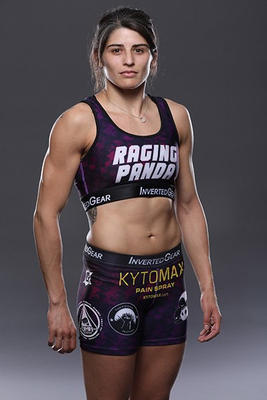 Fighting for a major organization has made Julia Avila ineligible for regional rankings.

Julia Aide Shumate Avila (born May 11, 1988) is an American mixed martial artist currently signed to the Ultimate Fighting Championship (UFC). Previously she has competed in Invicta FC, HD MMA, XKO MMA, Total Warrior Combat and King of the Cage (KOTC). Of Mexican descent, Avila was born in Los Angeles, California. She graduated from The University of Notre Dame and is currently a geologist in Oklahoma City. Avila has notable wins over former UFC flyweight champion Nicco Montaño and Marion Reneau.  On March 22, 2019 Avila was signed to the UFC's women's bantamweight division. Avila was originally scheduled to face Melissa Gatto on July 6, 2019 at UFC 239. Gatto was dropped from the card due to undisclosed reasons and was replaced by Pannie Kianzad. Avila won the fight via unanimous decision. Avila was expected to face Karol Rosa on October 26, 2019 at UFC Fight Night: Maia vs. Askren. The fight was later cancelled due to a knee injury from Rosa. The match was rescheduled to April 11, 2020 at UFC Fight Night: Overeem vs. Harris. Due to the COVID-19 pandemic, the event was eventually postponed. The pair was rescheduled to meet on May 2, 2020 at UFC Fight Night 174. However, on April 9, Dana White, the president of UFC announced that the event too was postponed to June 13, 2020. Instead, Avila faced Gina Mazany, replacing Rosa, on June 13, 2020 at UFC on ESPN: Eye vs. Calvillo. She won the bout via first round technical knockout just 22 seconds into the fight. Avila is scheduled to face Nicco Montaño on August 8, 2020 at UFC Fight Night 176.