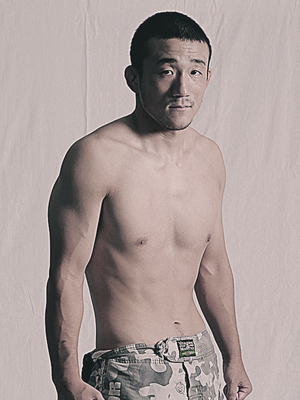 Kenjiro Takahashi is a Japanese mixed martial artist who competes in the featherweight division. Born February 2, 1987, he currently fights out of the Mach Dojo.

Takahashi's pro career got off to a less than stellar start as he would drop three of his first four bouts. He would lose to Yusuke Kasuya via TKO at M-1 Selection 2010 - Japan Round 1 on April 16, 20210, Masahito Hisataka via split decision at DEEP - Future King Tournament 2010, and Jae Hoon Moon via split decision at Gladiator - Gladiator 13. His lone win at that time came against Takatoshi Matsumoto at DEEP - clubDeep Hachioji 2 on August 1, 2010. Takahashi would win the bout via TKO in the second round.

The loss to Moon would prove to be the last defeat Takahashi would suffer for over four years as he would rattle off eight straight wins. Takahashi would start his run by winning all three of his bouts in 2012, none of them going the distance. He first bested Hidenobu Koike at Gladiator - Gladiator 32, winning via TKO in the first round. He would pick up his second win of the yearJuly 21, 2012, when he beat Ryosuke Togashi via TKO in the second round on the DEEP - DEEP Tokyo Impact 2012 card. Takahashi would then end his successful 2012 campaign by picking up a TKO win over Koji Yoshida at HEAT - HEAT 25 on November 18.

2013 would see Takahashi continuing his winning ways as he would emerge victorious in both of his bouts for that year. He would first defeat Yudai Aoyama at DEEP - 63 Impact, claiming the win with a first round armbar submission. Takahashi's next fight would go the distance, as he battled Katsuyoshi Beppu at DEEP - 64 Impact on December 22. Takahashi would be victorious with a unanimous decision verdict.

Takahashi would maintain his momentum heading into 2014, using it to claim victories over Do Gyum Lee and Hiroto Uesako. Takahashi beat Lee via TKO at GRACHAN 14 on July 20, and Uesako at DEEP - 69 Impact via a unanimous decision on October 26.

Takahashi's next fight would be his only fight of 2015 so far, and it wouldn't end the way he wanted. On August 29 he faced off against the accomplished veteran Kazunori Yokota at DEEP - Cage Impact 2015. Both men brought impressive winning streak into the bout,  with Takahashi winning eight straight and Yokota bringing in eleven consecutive victories himself. The fight went the distance and ended with Yokota defeating Takahashi via unanimous decision.