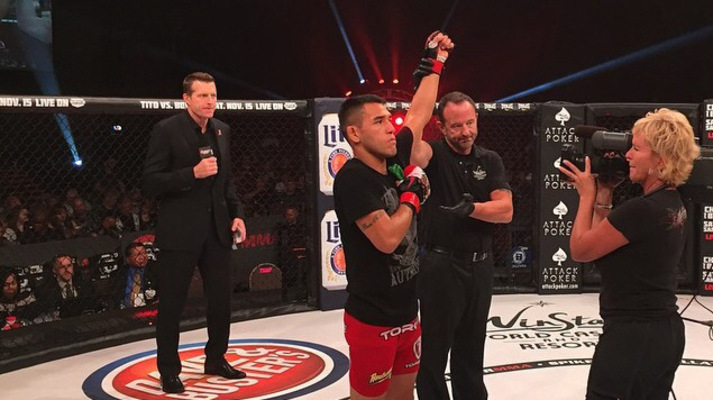 Fighting for a major organization has made Emmanuel Sanchez ineligible for regional rankings.

Sanchez began his professional MMA career in November 2011. He compiled a record of eight wins and one loss before signing with Bellator MMA. During this time, Sanchez mainly competed in the lightweight division, before moving down to featherweight. He also competed once as a welterweight, in which he suffered his first professional loss against current UFC competitor Lewis Gonzalez.

Sanchez made his promotional debut against Stephen Banaszak at Bellator 128 on October 10, 2014. He won the fight via rear-naked choke submission at 2:18 in the first round.

In his second fight for the promotion, Sanchez faced Alejandro Villalobos at Bellator 135 on March 27, 2015. He won the back-and-forth fight via unanimous decision.

Stepping in for an injured Goiti Yamauchi, Sanchez faced former Bellator featherweight champion Pat Curran at Bellator 139 on June 26, 2015. He lost the fight via unanimous decision.

Sanchez next faced Henry Corrales at Bellator 143 on September 25, 2015. He won the fight via split decision.

In his highest profile fight to date, Sanchez faced UFC veteran Justin Lawrence on November 6, 2015 at Bellator 145. He won the back-and-forth fight via split decision.

Sanchez next faced Daniel Pineda on the main card at Bellator 149 on February 19, 2016. He won the fight by split decision.