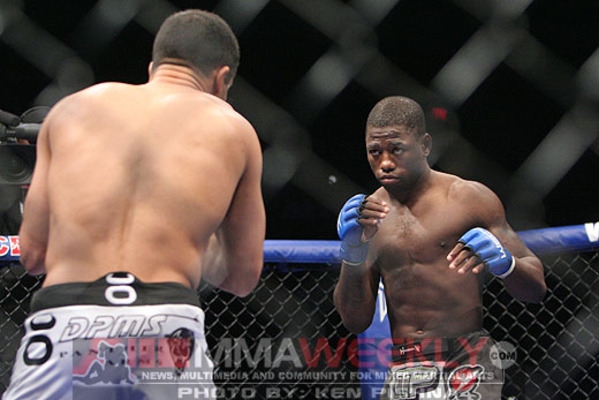 Mackens Semerzier is ineligible for regional rankings due to inactivity.
Fighters must have at least one completed MMA bout in the past two years to be ranked.

A talented high school wrestler, Mackens Semerzier was introduced to MMA during his time in the U.S. Marine Corps. Although his record is spotty, Semerzier has demonstrated an ability to hang with the top fighters in the world, both on the feet and on the ground.

After running his record to 4-0 on the local circuit, Semerzier was matched up with grappling ace Wagnney Fabiano in his WEC debut in 2009. Semerzier shocked fans and pundits by submitting the BJJ black belt with a triangle choke in the first round. Although he lost his next three fights in the promotion, Semerzier earned another victory upon his UFC debut in 2011 over Alex Caceres via rear naked choke. Semerzier went on to have a TKO loss in his next fight with Robbie Peralta overturned to a no contest after an accidental headbutt caused the stoppage. Although Semerier was supposed to rematch Peralta in 2012, Peralta was injured in training and replaced by Daniel Pineda. After tapping out to a first round triangle armbar, Semerzier was subsequently released from the UFC.

Although he has shown himself as a dangerous submission artist, Semerzier usually prefers to stand and trade with opponents. This has lead to some close decision losses, but Semerzier has earned a reputation as one of the division's most exciting young prospects as a result.