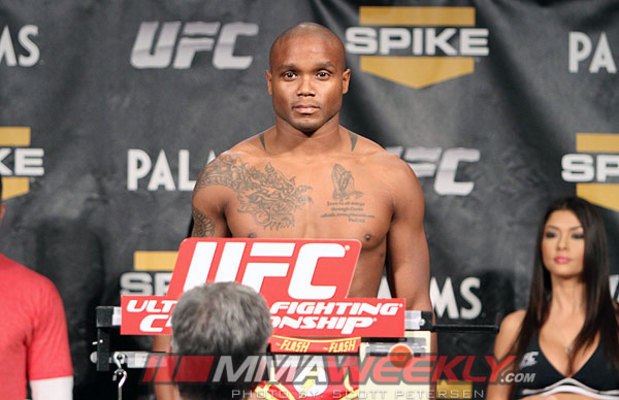 Marcus Brimage is ineligible for regional rankings due to inactivity.
Fighters must have at least one completed MMA bout in the past two years to be ranked.

Marcus Brimage began training Muay Thai after high school where he met Chris Connelly who he would open a gym with in 2006 called Spartan Fitness. Brimage began his mma career going 10-0 as an amateur before going pro in 2007. He would start training at American Top Team in Florida shortly before becoming a contestant on The Ultimate Fighter season 14 under Team Bisping. He was eliminated in the quarter finals, and the very first episode of the season, by Bryan Caraway via rear naked choke.

Episode 1 Brimage def. Bryson Wailehua-Hansen by TKO (Strikes) at 0:21 of Round 2

Episode 2 Bryan Caraway def. Brimage by Rear Naked Choke at 2:55 of Round 2

Brimage was then scheduled to fight former Strikeforce product Maximo Blanco at UFC 145. A dominantly uneventful bout to which Blanco was hesitant to engage, Brimage also did enough to win the bout via unanimous decision. Following the final bell, Brimage imitated the "running man" to express his frustrations with Blanco not engaging. Blanco then started doing push-ups to express to the judges that he wasn't tired after the contest. Brimage then joined in doing push-ups. Both fighters then began doing back flips. To this day in UFC history, this was the most strange post fight antics in attempt to persuade the judges.

Brimage was then scheduled to fight undefeated and highly-touted prospect Jimy Hettes at UFC 152. Despite being a heavy underdog, Brimage dominated the fight with crisp striking and ground and pound in route to another unanimous decision victory.

Brimage was once again scheduled to face a highly-touted promotional new comer, Conor McGregor at UFC on Fuel TV 9. Unimpressed by McGregor, Brimage stated that he was always set to face someone who is as cool as "new sliced bread" yet he always comes out victorious. Brimage was knocked out a little over 1 minute in the first round.

Following a year-long layoff, Brimage was slated to face Russell Doane at UFC 175 in his bantamweight debut. Brimage was outstruck for his second consecutive loss.

Looking to rebound, Brimage was then assigned to fight Jumabieke Tuerxen at UFC Fight Night 55. Brimage was among all of 11 bouts to end in a finish, his victory coming by way of first round head kick knockout.

Back to his winning ways, Brimage was then slated to face UFC newcomer Cody Garbrandt at UFC 182.