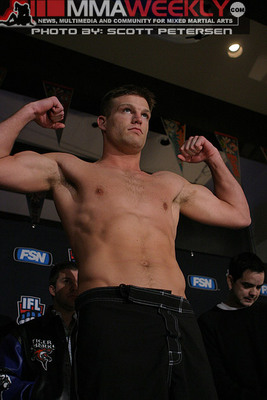 Bristol Marunde is ineligible for regional rankings due to inactivity.
Fighters must have at least one completed MMA bout in the past two years to be ranked.

Bristol Marunde was born in Fairbanks, Alaska, and moved with his family to Sequim, Washington and has competed at both middleweight and welterweight for several major MMA promotions including the IFL, Strikeforce, M-1 and the UFC. Marunde has fought since 2005 and boasts wins over UFC veterans Rich Attonito, Shane Primm, and Jay Silva.

Marunde had his biggest fight to date against former Strikeforce Middleweight Champion, Ronaldo "Jacare" Souza, but was defeated by 3rd round submission.

Shortly after, Marunde was brought onto the cast of TUF 16 and chosen as Team Carwin's 2nd choice after winning his entrance bout by first round guillotine. Marunde would find success in TUF again by defeating Julian Lane by unanimous decision, but would be eliminated in the tournament by Neil Magny.

Episode 1 Marunde def. George Lockhart by Guillotine Choke at 2:23 of Round 1