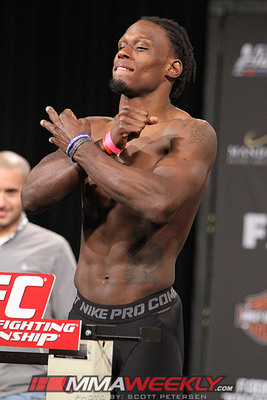 Clint Hester is ineligible for regional rankings due to inactivity.
Fighters must have at least one completed MMA bout in the past two years to be ranked.

Clint Hester was a member of Team Jones on the 17th season of The Ultimate Fighter. In Hester's opening fight he won a dominating decision over Fraser Opie. Jon Jones selected Hester with his 1st pick and 2nd overall for the season. Hester would lose his next match on the show when he went up against Jimmy Quinlan who submitted him in the second round.

Hester would get another shot when he was put on the Ultimate Fighter 17 Finale against Bristol Marunde. He would finish Bristol in the third round with a nice standing elbow to get the TKO finish. He would follow that up with a win over fellow Ultimate Fighter 17 fighter Dylan Andrews when he got the TKO finish after round 2. He would pick up his third straight UFC win when he defeated Andy Enz by Unanimous Decision. He looks to keep that streak alive when he faces Antonio Braga Neto at UFC Fight Night 44.