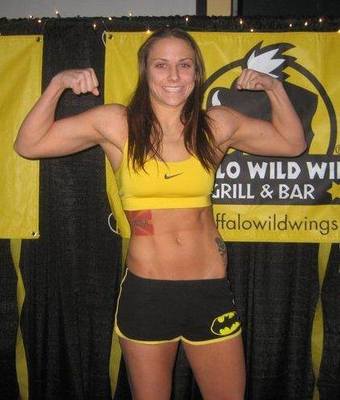 Fighting for a major organization has made Nina Nunes ineligible for regional rankings.

Nina Ansaroff was born on 3 December, 1985; in Weston, Florida, United States. She is still living in Florida, training at American Top Team, in Fort Lauderdale

Ansaroff began training in martial arts at the age of six when her parents enrolled her into Taekwondo. She is currently a 3rd degree Black Belt in Taekwondo and has a Purple Belt in BJJ. After suffering a motorcycle accident in 2008, Ansaroff began MMA as a way to get back into shape.

Prior to signing with the UFC, Ansaroff had a record of 6-3 pro and 3-0 ammy. Shortly after making her Invicta FC debut and knocking out Munah Holland in Round 2, Ansaroff was signed to the UFC.

Ansaroff faced Juliana Lima in her UFC debut at UFC Fight Night 56: Shogun vs. St. Preux. She loss the bout via Unanimous Decion - her first loss since 2011.

Ansaroff was expected to face Rose Namajunas, at UFC 187. Ansaroff missed her first weigh-in attempt, coming in at 4lbs overwieght. Ansaroff elected to make no further attempts to cut and was fined 20% of her fight purse. To make matters worse the very next day Ansaroff was pulled from the bout after contracting the flu, as she was deemed medically unfit to fight.

Ansaroff has a Associate Degree in Science and a passion for psychology. She is currently living with fellow UFC fighter Amanda Nunes.