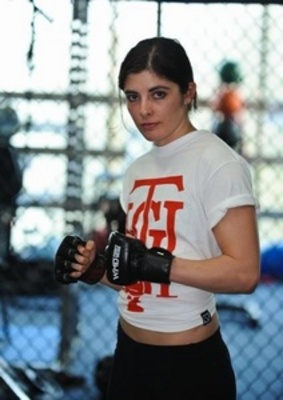 Alex Chambers is ineligible for regional rankings due to inactivity.
Fighters must have at least one completed MMA bout in the past two years to be ranked.

Alex Chambers was born on 28 October, 1978, in New South Wales, Australia. Chambers began training in marital arts at a very young age when her parents enrolled her into karate. By the time Chambers entered university, she held a 3rd Degree Black Belt in karate and was competing in international competitions. Chambers also has a Purple Belt in BJJ. Chambers attended the University of Sydney, graduating with BA of Science, majoring in Physics and Mathematics. Chambers was aspiring to be a astrophysicist or a robotics engineer, before discovering MMA. This passion leaves no mystery as to why her nickname is "Astro Girl". After she retires from MMA, Chambers plans on becoming a martial arts instructor.

Chambers discovered her first MMA gym - VT-1 Gym, through an obscure MMA forum. Soon after joining VT-1, Chambers became a national BJJ champion. This encouraged her to make her professional MMA debut in May 2010. Chambers made New South Wales MMA history, when she and Jessica Tolhurst, fought the first female MMA bout in the province. Chambers would win the fight via UD. Chambers would get another victory on the Australia regional circuit, before fighting for the Japanese promotion - Jewels. She faced Mizuki Inoue, at Jewels: 18th Ring, and would lose the bout via submission in Round 1.

Chambers made her main event debut in her next bout when she faced Mika Nagano, at BRACE 17: Brace Girls - this was also Brace's first ever all female card. Chambers made short work of the Japanese fighter when she knocked her out at 0:43 in Round 1.

In 2013, Chambers signed with the top female promotion at the time - Invicta FC. She made her US, Invicta, and Atomweight debut on 5 April, 2013, at Invicta FC 5: Penne vs. Waterson. She faced Jodie Esquibel, who she submitted at 1:35 in Round 1.

On 11 December 2013, it was announced that Chambers had signed with the UFC, along with fifteen other strawweight fighters to compete on the The Ultimate Fighter 20: A Champion Will Be Crowned. The winner being crowned the first ever UFC SW champion. Chambers was seeded 10th and was slotted to face 7th seed, Rose Namajunas. Namajunas was picked fourth by Team Melendez, thereby sending Chambers to Team Pettis. Chambers would lose this fight in Episode 7 of the season, due to the RNC in Round 1.

Chambers faced Aisling Daly, at the The Ultimate Fighter 20 Finale. Chambers made Australian MMA history again, when she became the first female Aussie to fight in the Octagon. Chambers would lose the fight via an armlock in Round 1.

Chambers was still looking for her first win inside of the Octagon when she faced Kailin Curran, in her homeland of Australia, at UFC Fight Night 65: Miocic vs. Hunt. After losing the first two rounds, Chambers rallied back to sink in an armbar, that faced Curran to tap at 3:15 in Round 3. This win earned Chambers a $50,000 Performance of the Night bonus from the UFC.

Chambers came in as a heavy underdog (+800) in her next bout against rising UFC star, Paige VanZant, at UFC 191: Johnson vs. Dodson 2. Vanzant controlled the first two round and eventually won the fight when she submitted Chambers early in Round 3.