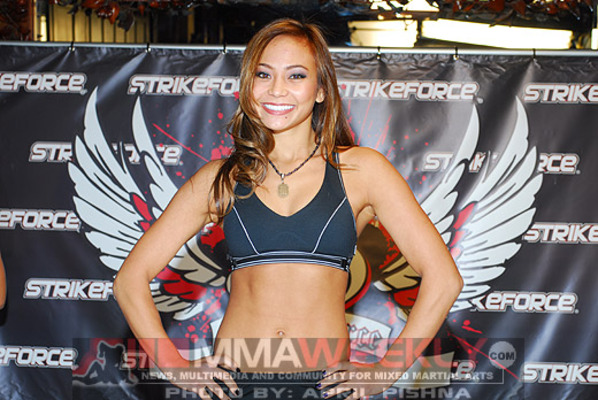 Fighting for a major organization has made Michelle Waterson ineligible for regional rankings.

Michelle Waterson began her training at 10 years old in Karate and she now holds a black belt in American Free Style Karate. Waterson was a contestant on the show Fight Girls on the Oxygen network as well as being a featured fighter on Bully Beatdown on MTV.  She was also featured in a music video for Megadeath, the song was Head Crusher.

The Karate Hottie would fight her way to an 8-3 record in 2010 before she took a break from MMA because she was pregnant and planning a wedding. She would make a triumphant return with a 1st round submission for Jackson's MMA Series. She made her Invicta FC debut at Invicta FC 3 facing off against Lacey Schuckman. She won via split decision.

On June 24, 2014 she appeared on American Ninja Warrior but failed to qualify when she fell on the first obstacle.

The Karate Hottie” Michelle Waterson made her first title defense against Japanese star Yasuko “Ikuko” Tamada (15-8-3) in the main event of Invicta FC 8, Sept. 6 at the Municipal Auditorium, Kansas City, Mo. She battered her brave, but clearly overmatched opponent with barrages of punches and kicks for nearly 3 full rounds, until the Japanese fighter could not take anymore and the referee Greg Franklin was forced to stop the action. This was the first time Yasuko Tamada was ever stopped in her nearly 30 professional MMA fights. Approximately three months later, Waterson lost her title against Herica Tiburcio, who defeated her by submission in the main event of Invicta FC 10. In July 2015, Waterson came back to victory by submitting Angela Magana during the event The Ultimate Fighter 21 Finale.