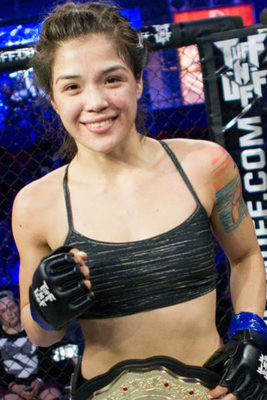 Fighting for a major organization has made Tracy Cortez ineligible for regional rankings.

Tracy Cortez (born December 10, 1993) is an American mixed martial artist and competes in the flyweight division of the Ultimate Fighting Championships. Cortez was born in Phoenix, Arizona, United States. She has three brothers, Jose Cortez, J.R. Cortez and Abraham Cortez. At the age of 14, she started training mma after she watched her first mma match where her oldest brother Jose, whose dream was to be a UFC fighter, fought against former UFC veteran Drew Fickett in November 2008. He won the fight via split decision. Jose stopped competing after the match with Fickett as he started to show cardiovascular problems and was later diagnosed with germ cell cancer. He passed away from the cancer in 2011. Cortez got a tattoo in remembrance of her brother on her arm. She struggled through depression after her brother's passing but managed to get back in track with the help of her family and Henry Cejudo and Angel Cejudo, who are the best friends of her oldest brother Jose. Cortez fought under World Fighting Federation and KOTC in her amateur career and amassed a record of 3-0 prior to being signed by Invicta Fighting Championships. Tracy made her Invicta debut on August 31, 2017 against Cheri Muraski at Invicta FC 25: Kunitskaya vs. Pa'aluhi. She lost the fight via submission in round two. She return to World Fighting on November 2017 fought against Roxanne Ceasear and secured a win via unanimous decision. Her next fight came on March 24, 2018, facing Kaytlin Neil at [ Invicta FC 28: Mizuki vs. Jandiroba. She won the fight via unanimous decision. Cortez went on to face Monica Median and Karen Cedillo in 2018 at V3 Fight Night 69 and Combate Americas: Alday vs. Lopez respectively and she won both of the fights. On February 15, 2019, Cortez faced Erin Blanchfield at Invicta FC 34: Porto vs. Gonzalez. She won the fight via unanimous decision. Cortez appeared in DWTNCS: Season 3, Episode 6 web-series program on July 30, 2019, facing Mariya Agapova. She won the fight via unanimous decision and was signed by UFC. Tracy is expected to make her promotional debut against Duda Santana in a bantamweight bout on November 16, 2019 at UFC on ESPN+ 22. However, in October 27, it was reported that Santana was forced to withdraw from the fight due to family issues and she was replace by Venessa Melo. At the weigh-ins, Cortez and Melo both missed weight for their fight, both weighing in at 136.5 pounds, 0.5 pounds over the bantamweight non-title fight limit of 136. The bout was initially proceeded at a catchweight and no fine was issued due to identical misses. However, later on the same day, Brazil's athletic commission (CABMMA) executive director Cristiano Sampaio announced that due to an error of the scale used at the weight-ins was set was 0.7 pounds above the official scale and thus both fighters were officially clear from missing weight and the bout proceeded at bantamweight. Cortez won the bout by unanimous decision.