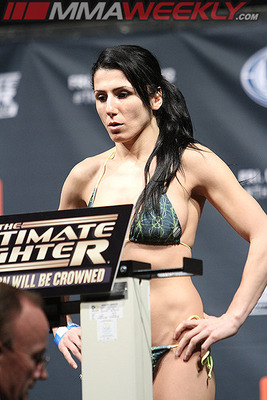 Fighting for a major organization has made Randa Markos ineligible for regional rankings.

Randa Markos made her pro MMA debut in 2012. Over the span of two years she had compiled a record of 4-1. Her sole loss was to future Ultimate Fighter cast mate, Justine Kish.

Having been selected from the open tryouts, Markos was awarded a spot to compete for the inaugural UFC straw weight championship of the 20th season of the Ultimate Fighter. She would go on to make quite the impression on the fans and Dana White, upsetting two higher seeds in route to her semi-final appearance.

Following the conclusion of the Ultimate Fighter, Markos faced fellow semi-finalist Jessica Penne at the season finale. In a very exciting back-and-forth battle, that earned both fighters Fight of the Night honours, Markos lost the fight via split decision.

Markos would bounce back with a Unanimous Decision victory over the veteran fighter Aisling Daly, dominating all three rounds.

On 29 September, 2015, Markos took to Instagram to announce that she quit her job and moved to Montreal, to join Canada's premier gym - Tristar.

Markos then continued to alternate losses. She dropped her first fight out of Tristar, losing a close unanimous decision to future title challenger Karolina Kowalkiewicz in the Polish woman's UFC debut.

Markos then left Tristar and returned to Michigan Top Team for a pair of fights. She edged a close unanimous decision victory over Jocelyn Jones-Lybarger in June of 2016, but was submitted by Cortney Casey at UFC 202 in August.

The Canadian fighter then moved on from Michigan Top Team to utilize a more "nomadic," (as Markos called it) training schedule, working on each discipline of MMA in order to get back to her roots. It paid off in her first fight under the new system, as she claimed a tight split decision victory over former strawweight champion and No. 3-ranked Carla Esparza in February 2017.