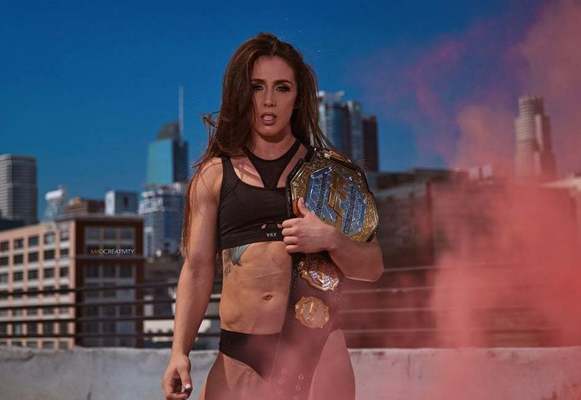 Fighting for a major organization has made Vanessa Demopoulos ineligible for regional rankings.


Demopoulos competed on season 2 of "Ultimate Beastmaster", making it to level 2 of episode 5.

Crystal Vanessa Demopoulos was born in Cleveland, Ohio and raised in Greece. Demopoulos was prone to fighting while she was in school and also developed drug and alcohol problems. Demopoulos described herself as a "high-energy kid" and lamented he lack of access to martial arts as a child due to her grandparents' disapproval of karate. Demopoulos spent 15 years as an exotic dancer, leaving that line of work to focus on her UFC career in 2022. Demopoulos is the author of the book Stripper Bible (Entertainer Edition), a guide for women working as exotic dancers on how to navigate the industry. She credits pole dancing with helping her practice celebratory splits and learning proper jiu-jitsu. Demopoulos trains out of Fight Ready MMA in Phoenix, Arizona.

Demopoulos started training MMA at age 21 and made her professional debut in 2017 despite never having an amateur fight. She won five of her first six fights, including an inverted triangle submission victory over Sam Hughes to claim the inaugural Legacy Fighting Alliance Strawweight Championship (LFA 85). Demopoulos appeared on Season 4 of Dana White's Contender Series, losing to Cory McKenna by unanimous decision. Later that year she lost her LFA belt to Lupita Godinez by majority decision (LFA 94).

Demopolous bounced back in 2021 with a TKO victory over Cynthia Arceo at LFA 103, which helped her get signed by the UFC. Demopoulos is 2-1 in the UFC and 2-0 at Strawweight. She lost her company debut at Flyweight to JJ Aldrich (UFC on ESPN: Barboza vs. Chikadze). Demopoulos won Performance of the Night honors by submitting Silvana Gomez Juarez off of her back at UFC 270. Six months later she defeated Jihn Yu Frey at UFC Fight Night: Tsarukyan vs. Gamrot via split decision. She is currently scheduled to face Maria Oliveira on Novmeber 19, 2022 (main event TBD).