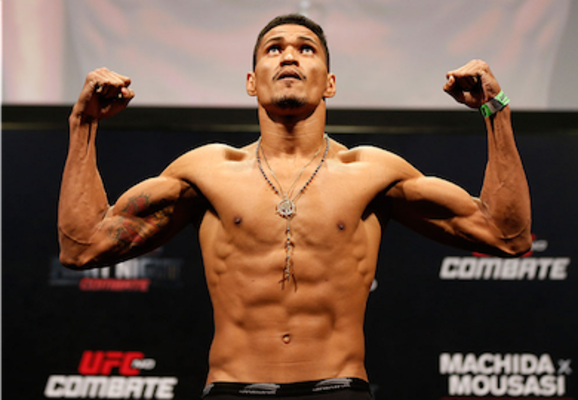 Ildemar Alcantara is a Brazilian welterweight fighter currently signed to the UFC. He is a black belt in Brazillian Jui Jitsu and trains out of Frankiko Team in Brazil. He has previously fought for Jungle Fight and Amazon Fight. He is a bit of an oddity in the UFC since his first fight for the promotion was at light heavyweight and his second was 35 pounds lighter at welterweight where he now remains. Of his twenty professional wins, sixteen have been stoppages with ten T/KO. He is the brother of UFC vet, Iuri Alcantara. All of his fights have been in Brazil. He has won Submission of the Night one time.

Alcantara began his career with a win and a lose to Bellator vet, Luis Santos and a lose to UFC vet, Fabio Maldonado. He would only have four fights in the first three years of his career, but by late 2008, he would begin to fight regularly. He would then go on to compile a record of 12-3 in his next fifteen fights. This would earn him a shot at the vacant Jungle Fight middleweight title. He would win three fights in five months to secure the championship.

Ildemar would sign with the UFC in late 2012 and have his first fight, as a late replacement, less than a month after his title win in Jungle Fight. He was able to submit Wagner Prado with a kneebar and pick up "Submission of the Night" honors. He would next drop down two weight classes and take on UFC debutant, Leandro Silva, and pick up a unanimous decision win. He fought Igor Araujo at UFC Fight Night 29 in São Paulo, Brazil. Despite being the favorite going into the fight, he would lose a unanimous decision. He next fiught promotional newcomer, Albert Tumenov, at UFC Fight Night 36 and was able to pick up a split decision win.