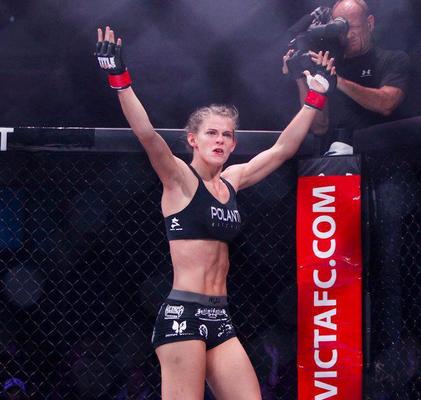 Jessamyn Duke is ineligible for regional rankings due to inactivity.
Fighters must have at least one completed MMA bout in the past two years to be ranked.

Jessamyn Duke started her amateur career in 2010.  She fought mainly for Absolute Action MMA and Tuff-N-Uff. She held the featherweight title in both organizations.

In 2012, Duke moved to professional MMA and signed with Invicta FC making her professional and promotional debut against Suzie "La China" Montero on July 28, 2012 at Invicta FC 2. She won via TKO in the third round.  Duke faced Marciea "Black Widow" Allen on October 6, 2012 at Invicta FC 3.  She won via submission due to an armbar in the first round.  This victory earned her a submission of the night bonus award, which was split between Duke and Stephanie "Macaquinha" Frausto, due to her submission victory over Amy "Lil' Dynamite" Davis in the same event.  Duke faced "The Queen of Mean" Miriam Nakamoto on April 5, 2013 at Invicta FC 5. The result was originally a KO victory for Nakamoto, but was later overturned by the Missouri Office of Athletics to no contest due to an illegal knee.

Jessamyn Duke was a contender on TUF 18.  She won her first fight to get in the house against Laura "Hothead" Howarth via first round triangle choke.  In episode 6, Duke fought "Rocky" Raquel Pennington.  They had a close slug fest with Duke winning the first from range and Raquel figuring her out to take the second and third to win the fight.  Duke would also take home a $25,000 bonus for fight of the season for her scrap with Pennington.

On 16 July at UFC Fight Night 45, Duke fought Leslie Smith and was defeated via TKO at 2:24 in the first round. The fight was explosive from the get go, but once Smith put the pressure on Duke faded against the fence.  This was when Smith unloaded on her, mixing head/body shots with a few kicks.  Duke was withstanding, until Smith landed a hard left hook to Duke's liver dropping her.