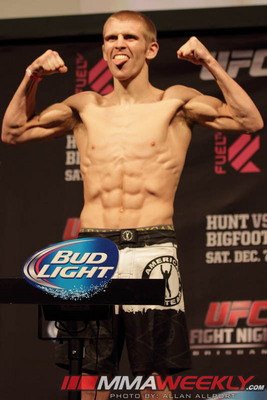 Fighting for a major organization has made Justin Scoggins ineligible for regional rankings.

Justin Scoggins is an American flyweight fighter currently signed to the UFC. He is a black belt in Kenpo Karate and currently trains out of American Top team in Coconut Creek, Florida. He began training in martial arts at 3 years old and began his MMA training at 16. As an amateur he won IKF World Champion Kickboxing and was a  South Carolina Amateur MMA State Champion. As a professional fighter he was the South Carolina Warfare MMA 125lb champion.

Of his nine wins, seven have been finishes including six T/KOs. He was undefeated as an amateur in seven fights and is currently undefeated as a professional.

Scoggins began his amateur career in 2010 once he finished high school. His first fight would end in a draw. He would return to action six months later and was able to compile a 6-0 record in just over six months. He made his professional debut in early 2012 and in his first year, he would go undefeated in five fights while also picking up the Warfare MMA flyweight title. He would pick up two additional wins in 2013, both by T/KO.

It was announced in August 2013 that Justin was signed by the UFC. He was initially listed as facing Dustin Ortiz at UFC Fight Night 27 in a late addition to the card, but less than a day later, it was announced that the fight had been scratched for unknown reasons. He was later given a bout with TUF: The Smashes cast member, Richie Vaculik, at UFC Fight Night 33 instead. Scoggins would impress many when he was able to pick up another TKO victory in the first round to pick up his first UFC win. He fought Will Campuzano at UFC 171 and was able to pick up a unanimous decision to retain his perfect record.