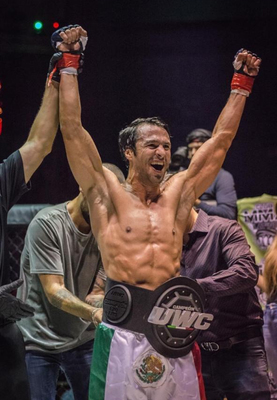 Akbarh Arreola is ineligible for regional rankings due to inactivity.
Fighters must have at least one completed MMA bout in the past two years to be ranked.

Arkbarh Arreola is a Mexican mixed martial artist who holds a brown belt in brazilian jiu-jitsu & a green belt in kenpo karate. 22 of his 23 career wins have come by way of stoppage (17 submissions & 5 knockouts) however 7 of his 11 defeats have also come by way of stoppage (7 knockouts). Before arriving in the UFC Arreola was active on the Mexican mixed martial artists scene going face to face with veterans such as Mac Danzig (TKO loss), Toby Imada x2 (TKO & decision loss), Gabe Ruediger (submission win) & Bret Weedman (TKO loss). Arreola finally arrived in the UFC in 2014 going up against Tiago Dos Santos who defeated Arreola by unanimous decision (30-27, 30-27, 29-28). He next faced veteran Yves Edwards at Fight Night 57 where he defeated Edwards via submission 1:52 into the first round. Arreola went 0-2 against Francisco Trinaldo (unanimous decision loss) & Jake Matthews (TKO loss) before being released by the promotion. In his most recent fight, Arreola faced Kazuki Tokudome at Pancrase 277. Arreola lost the fight 4:59 into the very first round.