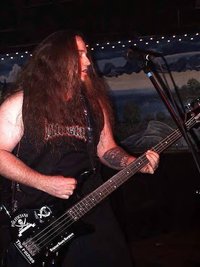 What is this? 3rd Degree Red Belt
my rank

I've been a fan of all martial arts since I was 7 years old. Chuck Norris, Bruce Lee, and Allan Tackett were my first martial arts heros. In fact Allan Tackett was my karate sensei from the time I was 13 until I was 15. I was also took up boxing with the YMCA. My favorite boxers when I was a kid were "Marvelous" Marvin Hagler, Gerry Cooney, Ruben Castillo, and Ray "Boom Boom" Mancini.

When I was 15 I started studying Tae Kwon Do. I also started wrestling in high school at around the same age. My high school wrestling record is nothing to brag about, but I learned a lot and enjoyed the competition both in wrestling tourneys and martial arts tourneys. I never won any trophys, and I probably got my ass kicked more often than not, but I always enjoyed the honor of competing.

When I was 19 years old I was turned on to a style of martial arts that forever changed my life. I watched the very first Ultimate Fighting Championship where I saw Royce Gracie beat all comers, by fighting on the ground and off of his back forcing his opponents to tapout due the risk of bones being broken or being choked unconscious. I found a Brazilian Jiu-Jitsu instructor who was a black belt in Machado Brazilian Jiu-Jitsu, and well the rest is history.

I don't compete anymore (not that I was ever any good when I did), but I very much enjoy the sport that MMA has grown to become today. I make a serious effort to never miss MMA events put on by such promotions as UFC, Strikeforce, DREAM, and Bellator. When PRIDE was in existence, I never missed an event of those either.

My favorite fighters currently are Anderson Silva, BJ Penn, Nick Diaz, and Junior Dos Santos. The only fighters that I really don't care for, and have never cared for are GSP, Allistair Overeem, Chuck LIddell, Tim Sylvia, Diego Sanchez, and Jaime Varner. My all time favorite fighters would have to be Bas Rutten and Rickson Gracie with Matt Hughes and Randy Couture coming a very close 2nd. Some of my favorite fights are Ortiz/F. Shamrock, Bas/F. Shamrock (any of them, even the one Bas lost), Couture/Liddell I, Rampage/Liddell II, and Wandy/Liddell.

I'm also a musician with 2 bands that play punk rock and hardcore. Music is my #1 passion with MMA a very close 2nd. Any other questions, feel free to ask. Keep it punk rock!!!!