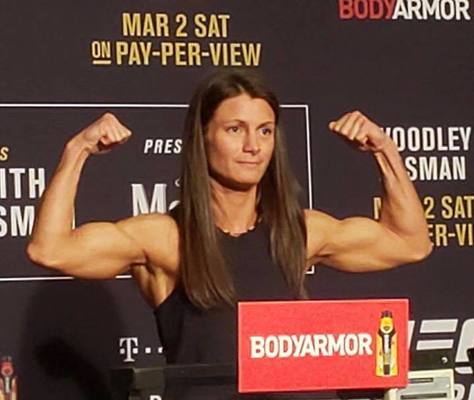 Hannah Cifers is ineligible for regional rankings due to inactivity.
Fighters must have at least one completed MMA bout in the past two years to be ranked.

Hannah Cifers (born June 26, 1992) is an American mixed martial artist and currently competes in the strawweight division of the Ultimate Fighting Championship (UFC). Cifers made her professional MMA debut in 2013. She fought under various promotions and amassed a record of 8-2 prior to being signed by UFC.
Ultimate Fighting Championship Cifers made her promotional debut on November 10, 2018, replacing an injured Maia Stevenson on short notice, at UFC Fight Night: Korean Zombie vs. Rodríguez against Maycee Barber. She lost the fight via technical knockout.
On March 2, 2019, Cifers faced Polyana Viana at UFC 235. She won the fight via split decision.
Cifers faced Jodie Esquibel on August 17, 2019 at UFC 241. She won the fight via unanimous decision.
Cifers was scheduled to face Brianna Van Buren on January 25, 2020 at UFC Fight Night 166. However Van Buren was pulled from the event with undisclosed reason and she was replaced by Angela Hill. She lost the fight via technical knockout in round two.
Cifers was scheduled to face Mackenzie Dern on April 25, 2020 at UFC Fight Night 173. However, on April 9 the promotion announced that the event was postponed.  The pairing was scheduled for May 30, 2020 at UFC Fight Night 176.