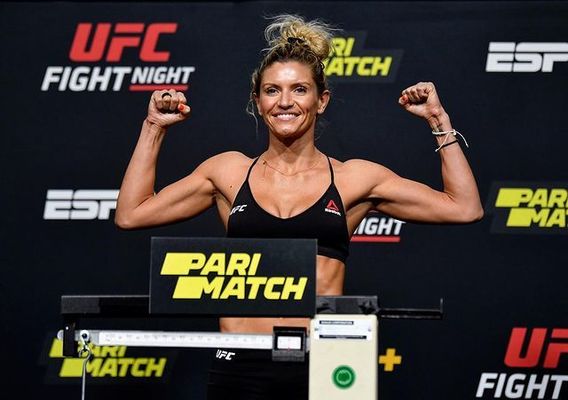 Fighting for a major organization has made Ashley Yoder ineligible for regional rankings.

Ashley Elizabeth Yoder (born October 20, 1987) is an American mixed martial artist and competes in Strawweight division of the Ultimate Fighting Championship (UFC). Yoder was born in Indianapolis, Indiana, United States. At the age of three, her parents got divorced. and she and her brother were raised by her mother. During her high school years, Yoder was involved in cheerleading, dance and competed in track and field. She attended Indiana University and received two Bachelor's Degrees in Criminal Justice and African American Diaspora Studies. Prior to starting to fight professionally, Yoder worked as a lifeguard. On her 18th birthday, Yoder lost her brother in a car accident, followed by the death of her cousin two years later. She started training in MMA after a friend introduced her to the combat sport. Yoder only fell in love with mixed martial arts after she had her first fight. Prior to that, she mainly used MMA as a channel to vent out her anger of the loss of her brother. Yoder participated in the UFC The Ultimate Fighter 20 tryout, but did not make the cut to be a cast member. She attempted to make it into the show again in April 2016, trying out for TUF 23. Yoder was chosen to appear on that season of TUF, and was signed by UFC later that year. Yoder fought most of her fights in the California circuit under BAMMA USA, Invicta and Gladiator Challenge promotions and amassed a record of 5-1 prior joining UFC. Yoder competed in strawweight card under Joanna Jędrzejczyk's team in the Ultimate Fighting Championship (UFC) in April 2016, produced reality television series The Ultimate Fighter (TUF) 23, also known as The Ultimate Fighter: Team Joanna vs. Team Cláudia. Yoder took on Jodie Esquibel on round 1 and she edged over Esquibel and won the fight via split decision. Yoder moved on to face Kate Jackson on Elimination Round and she lost the fight via unanimous decision of (20-18, 20-18, 20-18). Ashley made her promotional debut on December 9, 2016 at UFC Fight Night: Lewis vs. Abdurakhimov in Albany, New York against Justine Kish. At the weight-in Kish came in at 116.4 Ibs, over the strawweight limit of 116 Ibs, and she was fined 20% of her pay to Yoder. She lost the fight via unanimous decision with the scorecards 29-28 across the board. Yoder faced Angela Hill on July 7, 2017 at The Ultimate Fighter 25 Finale. She lost the fight by unanimous decision. Yoder faced promotional newcomer Mackenzie Dern on March 3, 2018 at UFC 222. She lost the fight via split decision. Yoder faced Amanda Cooper on November 10, 2018 UFC Fight Night 139. She won the fight via a split decision. Yoder faced Syuri Kondo on June 22, 2019 at UFC on ESPN+ 11. She won the fight via unanimous decision. Yoder was scheduled to face Yan Xiaonan on October 26, 2019 at UFC on ESPN+ 20. However, Yan pulled out of the fight in late-September citing a foot injury. She was replaced by Randa Markos. She lost the fight via split decision. Ashley Yoder is scheduled to face Livia Renata Souza on August 15, 2020 at UFC 252. Yoder is a dog lover and owns a dog named "Beth".