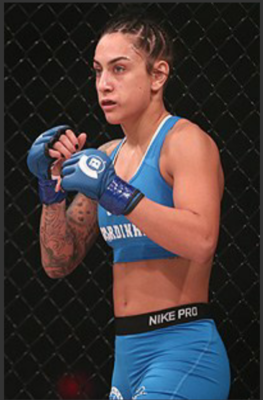 Fighting for a major organization has made Emily Ducote ineligible for regional rankings.

Emily Ducote was born in Los Angeles, California. She began training taekwondo at the age of 12 at the suggestion of her grandparents and is now a black belt in that discipline. Ducote also wrestled at Los Gatos High School and Oklahoma City University. As a high school senior she finished second in the California state wrestling tournament. While in college she began studying jiu jitsu under Giulliano Gallupi at American Top Team Oklahoma City. She attained a black belt in that discipline in 2022.

Ducote made her mma debut in 2015 and went 2-1 as a strawweight before moving up to flyweight and joining Bellator. She went 4-4 in that promotion and fought Ilima-Lei MacFarlane for the inaugural Bellator Women's Flyweight World Championship (Bellator 186). She lost that fight by triangle armbar.

Ducote returned to strawweight in 2019 and would finish Kathryn Paprocki by rear naked choke at Xtreme Fight Night 356. Later that year she would KO Janaisa Morandin and fight for the Invicta FC Strawweight Championship, losing Kanako Murata by split decision (Invicta FC 38: Murata vs. Ducote). Ducote would win her next three fights in Invicta to claim and defend the Strawweight Championship before making her UFC debut at UFC on ABC: Ortega v Rodriguez. She would defeat Jessica Penne by unanimous decision.

Ducote's nickname "Gordinha" is Portugese for "fat" or "chubby" and refers to her past struggles with weight gain and self-image.